The Other L Word 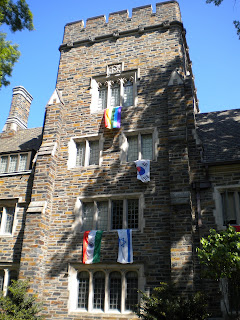 You know when you learn a new concept or come to a personal realization and all of a sudden it seems to pop up everywhere? Almost as if your realization is causing examples of this phenomenon to emerge? Like you’re learning about different kinds of deafness in you Intro Psych class, you walk out of the lecture, whip out your smartphone, and The New York Times is all, “Cochlear Implants See Changes in Affordability.” You go to English Lit. and your professor’s giving that obligatory 5-minute biographical sketch of the writer you’re reading and you find out that author had congenital hearing loss in one ear. You pop in your L Word DVD for a study break and Bette Porter is getting friendly with an edgy deaf sculptor. Where is it all coming from???

I had a similar experience today in that I decided what to write my final post of 2012 on and then my clever metaphorical parallel for gayness was all over my computer screen this afternoon. I loaded up the Colbert Report from Tuesday night, as I’m liable to do at lunch while om-nom-nomming on a simple, yet exquisite Blue Express turkey sandwich. And Colbert’s in-character doing this bit about California’s ban on gay ‘conversion’ therapy, and he compares it to trying to ‘correct’ left-handedness. That’s what I was going to say!

Apparently it was not just me who was going to say it either, because browsing AfterEllen I found a pretty fantastic article called “What kind of parent would want a gay kid? The best kind.” about all the expectations parents form for their kids even before they’re born. The basic conclusion was that if a parent said something like, “Well, kiddo, you’re OK but I just really wish you’d come out a brunette rather than a ginger” most of us would agree that would be a pretty stupid and terrible attitude to have towards your child. And then there it was again, the writer, Lucy Hallowell, goes on to say, “Having a gay kid should be no different than having a kid with blond hair (maybe you were wishing for brown)…or left handed (because then you have to have a pair of those special scissors around the house).” Not just those scissors, but the pool of lecture desks available to you will be so much smaller. And you’ll probably smudge your paper while you’re writing.

Now I’m obviously not saying all the societal ramifications of being LGBT are tantamount to having to order a special pair of scissors. Hate crimes, bullying, discrimination, and LGBT suicides are extremely real. But I’d like to hold up the left-handed parallel, not as an accurate figurative representation of reality, but as a future ideal. As in I hope one day being gay will actually be like being left-handed. I think that would be a good place to be. I keep realizing, or re-realizing, that a few of my teammates are left-handed, and my primary response is, “Huh, I didn’t know you were left-handed” *moves on with day*. It’s just a sort of quirk, clearly not a handicap. But people used to go to great lengths to try to ‘fix’ left-handedness. The English word “sinister” is derived from the Latin for “left.” I’ll leave you with a scene that illustrates what this gay-as-left-handed reality could look like. It’s from the British show Skins, which has a fairly rabid cult following, especially revolving around the lesbian couple Emily and Naomi. Emily is standing at a bus stop in the freezing cold with her friend Thomas. She’s just borrowed his shoes.

THOMAS: It's fine. Shall we call a taxi? I don't think this bus is going to come soon.

Besides, my feet are extremely cold.
Posted by Blue Devils United at 8:00 AM 1 comment:

Every week, we collect anonymous entries sent in using the link on our sidebar and post them all on Monday. We post anything as long as it doesn't contain personal attacks, hate speech, or express or insinuate that one is at risk for hurting themselves or someone else. Please read this for an explanation of this policy and seek help if your or a friend find yourself in that position. With those exceptions aside, please feel free to submit your thoughts and questions. :)

We've got a post for you today. We at the blog would also like to wish you the best of luck through finals week. See you on the other side.


Please remember that there are a number of resources available on campus and in the local community. These resources are available over breaks and throughout the school year. If you or a friend are experiencing thoughts or urges to harm yourself or somebody else, please reach out to the following resources: In an emergency, please don't hesitate to call CAPS at any time, including "after hours" at (919) 966-3820. Ask to speak to the advice nurse and tell them you are a Duke student. You may also call the Trevor Project, a national hotline specifically for lesbian, gay, bisexual, trans, queer and questioning youth (college students included). Their number is 866-4-U-TREVOR (866-488-7386).
Posted by Blue Devils United at 8:00 AM 1 comment: