Most Americans know what LGBT means, and many people have already postedblogs about the various identities within the queer community. However, there are some who remain in the dark (willingly or unwillingly) about the extent of gender diversity. To clear up any confusion, and perhaps a few misconceptions, here is LGBT's full acronym (and I think I've missed a few):
LGBTTQQIAPK: lesbian, gay, bisexual, transgender, transsexual, queer, questioning, intersex, asexual, pansexual, and kink

Lesbian: Woman attracted to women
Gay: Man attracted to men (the word "homosexual," or one attracted to the same sex, is typically used to refer to gay men, but lesbians are also homosexual)
Bisexual: person attracted to both sexes
Transgender: a person who breaks gender norms, i.e. men wearing dresses or women wearing (stereotypically) masculine clothing
Transsexual: a person who has physically altered his or her body to match their gender identity
Queer: anyone who breaks gender norms; the word "queer" is often used to represent the entire LGBTTQQIAPK community
Questioning: person unsure of sexual orientation
Intersex: person who does not fit neatly into the male or female categories
Asexual: person attracted to neither sex
Pansexual: in the words of Lyla Cicero, a blogger for UnderCoverintheSuburbs.com who has a doctorate in clinical psychology, "a refusal to define sexual orientation from binary notions of gender" (see, I did miss a few letters, since her acronym is longer than mine: LGGBTQQIAAPK; the extra "g" and "a" stand for genderqueer and androgynous, respectively)
Kink: while perhaps politically incorrect, the word kink describes "fetishes" or private sexual activities people enjoy with their lovers in the bedroom (and before anyone rushes to conclusions about "sexual deviants" within the LGBTTQQIAPK community, there are plenty of straight people who enjoy literotica.com, porn websites, and theFifty Shades of Grey series)

A few notes on the above descriptions: Gay men and lesbian women rarely refer to themselves as homosexuals, just as straight people don't refer to themselves as heterosexuals. Transsexuals don't call themselves transsexuals either; they may call themselves "transsexual men" or "transsexual women," but more often than not they identify as either man or woman. While lesbian, gay, bisexual, transgender, and transsexual are easily identifiable sexual orientations, queer, questioning, intersex, asexual, pansexual, and kink are not, and they may not be taken as seriously. People identifying with the latter are not "confused" or "misguided," and we have no right to tell them so. They are what they identify with. We just have to deal with it.

To conclude, I'll address three hypothetical complaints:
"Why should I spend time learning about gender identity? Why should the LGBT community get any special attention?"
If you're asking this question, you are probably one of many people who perpetuates queer stereotypes and uses offensive gender terminology on a regular basis. Take some time to learn about LGBTTQQIAPK people - maybe even TALK to a few rather than assuming things about them - so you can be a little more enlightened. They need "special attention" (if you insist on calling it that) just like any minority group needs attention: to identify the issues they face and to make sure they don't have to continue facing them.
"The title is too long!"
No one is requiring you to write out the entire acronym or even know what each letter stands for (the most I write is LGBTQ). It's just good to be informed so you don't rely on prejudicial assumptions to describe the queer community.
"Aren't people just making up gender identities now? Should people even be allowed to claim anything beyond LGBT?"
No to the first question, yes to the second. It's a good thing, not bad, that people are refusing to follow gender norms imposed upon us by homophobia, sexism, and other old-fashioned, oppressive gender-controlling social institutions. Some of us have finally realized that girls aren't required to like pink to be girls, that boys can wear high heels and still be boys, and that we shouldn't even be forced to choose between male and female. If you're uncomfortable with gender flexibility, that's just tough. It's time to break social habits and accept the fact that gender isn't as straightforward and repressive as it used to be.
To use the words of Lyla Cicero again, "if that acronym [LGGBTQQIAAPK] looks a bit absurd, it speaks to the absurdity of thinking there are a few isolated "sexual minorities" while the rest of the human race is "normal" and fairly similar." There is no singular "normal" regarding gender. Normality in sexuality is whatever orientation, or lack thereof, the individual feels comfortable declaring. At present, gender norms are still "females do this, males do that." The term "gender norm" needs to be replaced by gender freedom. 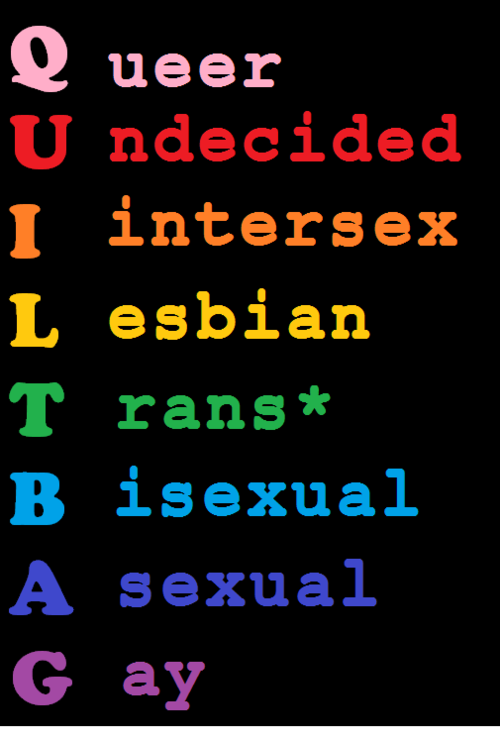