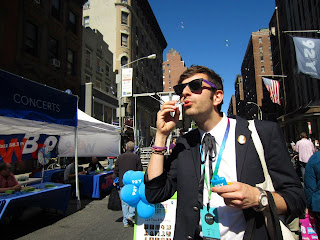 I know that there’s been a lot of controversy over your recent op-ed for The Chronicle this past week entitled “Gay Marriage is Not a Right,” Having spent the entire semester reading your eloquent and well-informed prose about various issues confronting the Duke community and the broader world, I wanted to take a moment to thank you personally for all that your brilliant article did for me.

First off, thank you for reminding me what I’m fighting against:

Because the sentiments embodied by Amendment One are not just shared by the North Carolina legislature and 61% of this state, but by people who walk around on my campus everyday.

Because you’re not the only one who thinks it’s okay to put minority rights to a majority vote.

Because the phrase “liberty and justice for all” still excludes people like me.

And because, despite your categorical rejection of my right to a family, you still feel comfortable asserting that you’re not a bigot.

Secondly, thank you for reminding me to fight harder:

Because Duke’s introductory political science and economics classes can teach a freshman like you to use those intellectual tools for hatred.

Because The Chronicle still takes homophobia so lightly that they’re willing to publish your work and let you sit on their Editorial Board this upcoming year.

Because denying members of the Lesbian, Gay, Bisexual, Transgender, and Queer community fundamental rights is still considered to be a “legitimate political opinion”

Because we have an education system that allows even those with access to the best educational resources to know absolutely nothing about what the LGBTQ community has gone through—from Stonewall to electroshock therapy to the AIDS crisis.

And because opinions like yours are taken so seriously in many communities that LGBTQ people are routinely killed, assaulted, or forced into poverty simply for being who they are.

Lastly, thank you for bringing our community together:

Because after your column was published, we all remembered that the fight against homophobia and heterosexism hasn’t ended on this campus, in this state, or around the world.

Because over the course of this semester, you’ve once again reminded us just how closely homophobia and sexism function together.

And because, through your writings, you’ve only fortified our collective desire to ensure that people like you are remembered as those who stood against the tide of progress.

P.S. I would also like to point out another portion of your article that I found deeply unsettling, namely your assertion that “playing Nickelback loudly from my car...is not harmful enough to strip me of the liberty to play it.” Personally, I find Nickelback’s music to be a fundamental violation of my human rights and would support a referendum calling for its abolition in the state of North Carolina.