In favor of meaningful conversation 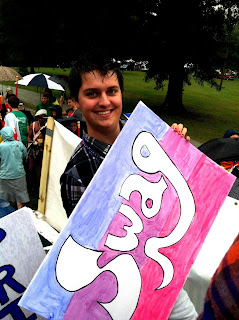 As you may have noticed, I don't usually post on the blog, but today is a bit of a special occasion. With the election results yesterday, I've got to admit I'm pretty excited. I'm not really a person to typically get very excited about election results, as I'm much too cynical of a person. But even a cynic like myself can't help but get a little hopeful when it looks like 3 states are going to legalize same-sex marriage. THREE. That's a pretty big deal.

That's not actually what I wanted to say in this post, I just felt that I'd be remiss if I didn't mention it.

Now, for the actual substance:

What I actually want to talk about is religion. This is a pretty controversial topic, I know, but bear with me. Basically what I want to say is that religion, regardless of denomination, is not necessarily homophobic. I am
not a religious person myself, in fact I am a strong atheist, but I find the equating of religion (particularly Christianity) with the homophobic sentiments sometimes espoused by religious people to be a dangerous and unproductive problem that we really ought to address.

I will not try to deny that the reasoning used to justify anti-LGBT sentiments is often Christian in nature, but I whole heartedly reject that the Christian faith is homophobic. We can point to passages in the Bible that portray a homophobic attitude, but these passages do not define the Christian faith. I think it's important to note that for those of us who are not Christians, an accurate critique of the Christian faith requires an honest and studious effort to actually understand the  beliefs and justifications used by Christians in their faith.

Another important point, Christianity, or any other religion, is not a one size fits all. While one Christian may firmly believe that God is against the LGBTQA community, another may be fully in support of said community, or perhaps even a PART of our community. A belief in the Christian conception of God does not necessarily preclude a commitment to the support and affirmation of LGBTQ community. Indeed, I know some Christians who believe that their faith requries them to be supportive and affirming towards our community. A fundamental component of the Christian faith in particular is that love. With love playing such a crucial role in the faith, it isn't a huge strech to imagine that Christians can be affirming and loving towards LGBTQ identified people.

So my final note is this, that regardless about how you feel about the Christian religion, or any other faith, try not to hate on it. Doing so precludes any sort of meaningful conversation between the two communities, because we all know that when there is hostile rhetoric coming from a community towards us, it's rather unlikely that a lot of us will want to engage in a dialogue with that community. Futhermore, hostility towards faith communities is hurtful to members of those faith communities that are within our community
as well. Worse than that, it ignores that these people exist in our community. Take it from me, those among us who are atheists have a lot to gain by engaging with our thoughtful and faithful peers.

tl;dr: Don't knock any religion without making a serious effort to understand it from it's own premises. Doing otherwise is intellectually dishonest and only harmful to everyone.

P.S. If it feels like I focused too much on Christianity in this post, that's mostly because the things I've heard against religious people have almost exclusively been against Christians. I believe that the above sentiments apply to all faiths, I just lack experience with most of them.
Posted by Kyle at 8:00 AM