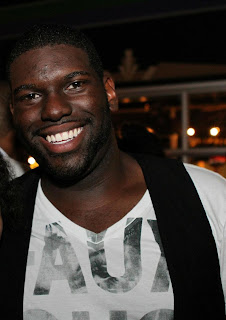 Thanksgiving was last week. That holiday where the main focus is supposed to be around people you love and sharing good times. For me, Thanksgiving was about eating as much as possible while watching the football games and pretending to go to sleep so I didn't have to participate in the conversations that were going on around me. Here a few snippets of the dialogue:

"Black men go over there to Asia and marry them Chinese women because they know they can control them."

"Asian and Japanese women always get more money from the courts when they divorce a Black man because they come over here to America with no skills and can't speak English so they need the help."

"I think a bunch of faggots made up the laws about who gets what when people get divorced. There's no way in hell a REAL man would write laws that would make men give women more money."

I tuned out other parts and tried to forget the worst.

Fun stuff isn't it? The conversation started when a member of my family mentioned how she noticed a lot of Black men in the military were marrying non-Black women. (I have no knowledge as to the validity of the statement...)

So, I sat there trying to ignore the ignorance. Focused intently on the game I was watching with my plate of Thanksgiving food piled high, I figured it'd be best for me to keep my mouth stuffed with food for fear that I'd blow a gasket and go insane from the racism and homophobia.

The more I sat in silence, the more I grew upset at myself. Why couldn't I just say something? Why sit there silently simmering about the bile being spewed in their speech when I could stand up against them? If I sit here in my (albeit, uneasy) comfort and just let it go, what right do I have to ask anyone else to speak up for me when my identity is being dragged through the muck?

I felt like a coward. That was my chance to kill two birds with one stone. I could have finally come out to my family and shown them that I fully embrace this "different person" I've become while at Duke as they like to say. I could have shown them how I learned so much more about life in general than actual knowledge gained from a textbook.

But no. I sat there. Too scared of the consequences to speak up for what is right. Too afraid of becoming the family outcast that I practically already am. Too terrified to show them the real me that hides beneath the shell of the me they used to know. I sat there taking solace in the fact that it was easier for me to ignore it until I came back to Durham than stand up and fight. I could let it all pass until I could pretend once again that the family I'm supposed to love unconditionally and put before anyone or anything else and is supposed to do the same for me doesn't actually hate everything about the real me. I could pretend that I wouldn't know how they'd react or what they'd say behind my back.

Except, now I do know. They didn't even have to tell me directly.