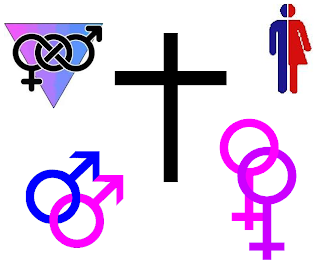 I am a Christian, and I've heard all types of opinions from other Christians regarding homosexuality (when I say homosexuality, I am referring to all people who identify with the LGBTQ group). Reactions range from "I don't mind being around them, even though their lifestyle is sinful" to "I think gay people are going to hell" (yes, I've heard the latter stated explicitly - by a middle schooler). There are a precious few of us who do not find homosexuality abominable and in fact do not think homosexuality is a sin. I happen to be one of those people. The following statements are arguments I've heard from a variety of characters who, in my opinion, need to think about what they're really arguing for.

1. "Biblical sin" argument: "The Bible says that homosexuality is a sin."
The Old Testament Bible forbids working on the Sabbath (Deuteronomy 5:12), permits the stoning of virgins (Deuteronomy 22:21), and frequently doles out death as a punishment for wrongdoings. The New Testament heavily implies that you should not have sex before you’re married (1 Corinthians 7) and states that women were created for the purpose of men (1 Corinthians 11:9). Most Americans today use neither the Old nor the New Testament to dictate their behavior; most of us are not abstinent, and hopefully all of us believe that women are equal to, rather than subservient to, men. Numerous discriminatory attitudes, among them male superiority and foreign oppression, are evident in the entirety of the Bible. Can it really be a reliable source of law or morality if it violates basic human rights (e.g. permitting slavery in Leviticus 25:44)? And in at least one famous instance where homosexuality is mentioned (Sodom and Gomorrah, Genesis 19), the Bible is referring to rape. Is it possible that the authors of these stories had their own preconceptions regarding homosexuals and wrote their stories from a biased perspective?
2. "Homosexuality is a choice" argument (still assuming homosexuality is a sin):
Some Christians may say that homosexuality is a choice, meaning that a man or woman chooses to be attracted to people of the same sex (or of both sexes for bisexuals). If they wanted to, they could have chosen to be attracted to the opposite sex and therefore avoided committing a sin. If that's the case, then heterosexuality is also a choice, meaning heterosexuals choose to be attracted to the opposite sex rather than become attracted to the same sex. Most people giving this argument would be a tad put off by the suggestion that at any moment they could become attracted to someone of the same sex. In short, they would not consider heterosexuality a choice because they could never consider themselves able to "become homosexual." So this argument's out.
3. "Homosexuality is uncommon and therefore unnatural" argument:
There are a lot of things that are uncommon that we don't consider unnatural. Only 13% of the American population is black. Only 0.2% is Native American. Does that mean that being Native American is unnatural because it is uncommon for most people to identify with a federally recognized tribe? Does that mean that the color of my skin (I am an African-American woman) is unnatural, because it does not match that of the majority’s?
4. "No harm done" argument: “I think being homosexual is sinful, but I’m not trying to ban their civil rights."
This is merely excusing one's homophobia because he or she is not doing homosexuals any direct physical harm. However, this way of thinking is the foundation for laws that do violate their civil rights. Saying that you think "women belong in the kitchen" and then saying you're not against women having careers...well, you have the same mentality as the people that are against women in the workplace, don't you?
5. "Civil rights for homosexuals is not the same as civil rights for other groups of people" argument:
The real question here is, “Is sexuality an irremovable part of our identities?" I can't answer that yet. But I don't think it needs to be answered to know that the civil rights for people in the LGBTQ community should be protected. If there is something about an individual that can be used against him to justify physically harming him or making him feel ostracized, we typically make laws to protect said individual. A disability wouldn't necessarily be considered part of someone's identity, but there are laws protecting the disabled because they have been discriminated against. People are also discriminated for having a sexuality that is socially abhorrent; therefore, there need to be laws that protect them.

The question of homosexuality for Christians, indeed for other major faiths in the United States, should not be treated as a matter of lighthearted opinion but rather as a socially significant stand. I implore all people, in support of homosexuality or no, to recognize that prejudice against LGBTQ individuals exists, that their rights are being encroached upon, and that they need to be defended by U.S. law in job security, marriage, and social well-being.
-Carmen
Posted by Blue Devils United at 10:05 PM