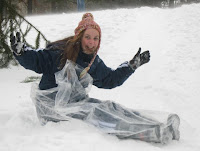 Every other Wednesday I will be writing about LGBT Issues in Sport. Between each regularly scheduled post I may chime in with more posts if something comes up and/or I have the time. I have a serious academic interest in sport and in this column I’ll be highlighting current events, sharing resources, reflecting on complex issues and sharing athlete’s stories among other things. For more about me, you can read my first post, here. Please feel free to email me with thoughts or if you come across something you’d like me to include on the blog.

US Olympic figure skating personality Johnny Weir is always in the spotlight. Currently under attack by animal rights advocates for his use of real fur, Weir has a history of dodging questions about his sexuality. In recent years his eccentricity on and off the ice has sparked conversation. Some are critical of his effeminate nature—saying he’s figure skating’s cliché and not good for the sport which is trying to grow its fan base (read: be more masculine in the traditional, gender binary way). Others love the passion and grace he brings to the ice. Either way, most everyone has an opinion about his sexuality and wants to know definitively if he’s gay or straight.

Most recently, ESPN’s Jim Caple went to write a story about Weir—who suggested that they chat while getting a mani-pedi at a Fifth Avenue spa. Following this experience, Caple wrote a lengthy article for ESPN’s Outside the Lines called “Johnny Weir is a Real Man.” In it, he chronicles Weir’s flamboyant mannerisms and attitudes while defending figure skating as a “real sport.” He also applauds Weir for being so open and voicing his strong opinions. Opinionated he may be, but Weir isn’t a completely open book. When Caple asks him about being gay or straight Weir responds by saying

Most people assume he is gay, which leads to some hostile feelings from members of the LGBT community. There seem to be two schools of thought on the matter. The first is a sort of resentment toward him not being a spokesperson or perhaps having the courage to be out as a public figure. One commenter wrote the following:

Thanks Johnny Weir, for not actually coming out of the closet and demonstrating that successful [sic], high-profile athletes can be openly gay, but instead remain "undeclared" and play up every negative stereotype of male homosexuality that the media will needlessly feed off of until you inevitably get caught "in the act." Thank you for not doing the hard work of being an openly gay athlete that may be able to transcend sterotypes [sic] and be a role model for young gays around the country, but instead looking like a 16 year-old truckstop twinkerbell [sic] that just hooked up at a Pride Alliance meeting while giving the media open cover for reinforcing every negative cliche about male homosexuality.

Seriously, on behalf of the gay community, we thank you for all you have done.

The truth is that I get where this person is coming from. Having public icons who lead openly out lives is important for progress and providing role models. But at the same time, I LOVE the message that Weir is sending. Personally, I find it moving and empowering. I think it’d be a different story if he vehemently denied being gay or proclaimed his heterosexuality at every chance (let’s not forget that all of this is assuming that he’s actually gay…but more on that below). In short, the message he’s sending is equally as valuable as coming out.

As much as he isn’t willing to be the token gay athlete, he seems to be waging his own war on homophobia. Only, his message is “I’m not going to let you define me by my sexuality.” Today, this seems to be a popular push by many members in the LGBT community. In the past, and even still today, people come out and are accepted and embraced—but then they’re forever stuck in this role of “the gay _________ (fill in the blank).” Weir challenges that. There are so many complexities that make each of us who we are and sexuality isn’t necessarily the defining characteristic (this sentiment seems to be expressed fairly frequently on the blog and at The Center). I don’t think he’s taking this stand with the intent to benefit the gay rights movement, because his website makes it quite clear that everything he does he does for himself (peruse through his Q&A and you’ll get that impression, too) but I think he’d be glad to know he was making a difference.

But, just for fun, let’s play out some other scenarios.

Alternative 1: He comes out. If Johnny Weir came out, let’s be honest—nobody would be shocked. I don’t believe that his coming out would shake things up or advance the movement. At all. People would simply say “Oh, Johnny Weir is gay? Yeah, like, we already knew that.” I don’t mean to say that he shouldn’t come out, if he’s gay and if he wants to. I just mean to say that I don’t think it’d be the progressive move his critics are hoping it would be.

Alternative 2: He’s straight. I know. You think I’m kidding. But, I’m not. What if Johnny Weir is straight? Has anybody considered that? Instead of making a blanket statement about sexuality not defining him, if he’s straight, his only other real alternative is to proclaim his heterosexuality. Him proclaiming his heterosexuality in the face of everyone who calls him gay (which I promise you, would be a lot) would make it seem like being gay was a bad thing—something you don’t want to be, rather than just something he isn’t. He’d be forced to defend his straightness and flaunt it. Honestly, it’s one of the things I hate most about people: going out of your way to make sure everyone knows you’re straight lest someone think otherwise. Not to mention, others would be even more critical of him than they are now because they’d all insist that he was secretly gay and setting a bad example. And in the end, it wouldn’t make him the out-gay-athlete-role-model people want him to be, anyways.

So, maybe his message isn’t just revolutionary (in that, other celebrities haven’t taken this route before…at least that I’m aware of). Maybe it’s also the most impactful.

Readers, I’d be interested to hear what you all think about his message and the alternative scenarios that I’ve provided. Is it empowering? Can you identify with the desire to not just be “the gay ______ (fill in the blank)”? Am I totally off base? Is there another scenario I didn’t think of?