This semester I'm in a class on sex work. The class is divided into four sections: prostitution, sex trafficking, exotic dancing and pornography. Throughout the semester we have exclusively talked about sex work in the context of heterosexual individuals. However, when we got to the section on pornography, we did extensive work on gay pornography, including watching clips and documentaries that showed explicit scenes of anal and oral sex between two men. We had seen many of these sorts of clips between heterosexual couples, so it only seemed logical that if I have to be subjected to watching heterosexual sex, then the rest of the (presumably straight-identified) class should have to watch gay sex.

I was looking forward to analyzing a type of sex that I am used to, yet was also worried that the class reception would be overtly homophobic and only serve to invalidate my own sexual desires. As the clip was starting I held my breath. The two boys start kissing. I look around the room. Everyone is still watching and no one is squeaming in their seats yet. Clothes start coming off. People are still watching. The oral sex begins. Everyone is still watching. I am shocked. Even the straight-identified men in the room are still looking. However, there's still more to go. The anal sex starts. People are still watching with their academic eye. Not at all the reaction I was expecting. Then one of the boys sucks on another ones toes. The class erupts in an expression of disgust.

Gayle Rubin, in her transformative essay "Thinking Sex: Notes for a Radical Theory of the Politics of Sexuality," describes a hierarchy of sexual acts with heterosexual, monogamous sex on one end and fetishistic sex on the other. She states that "as a result of the sex conflicts of the last decade, some behavior near the border is inching across it." Has our society advanced to the point where gay sex is seen as an appropriate form of sex? 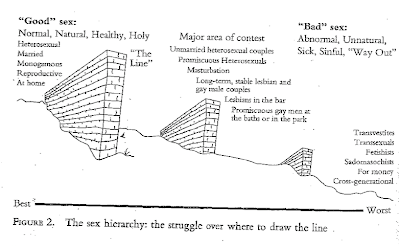 While I do think the positive reception in my class is due to the progressive nature of my classmates and not an overall societal advancement in sexual thought, I do think that we have come a long way in destigmatizing sex between members of the same sex. In the six years since sodomy was deemed unconstitutional in Lawrence v. Texas our society has gradually become open to all types of sex between consenting adults. I hope that in the future, we will only an increase in the acceptance of all types of consensual sex acts.
Posted by Jack at 5:58 PM