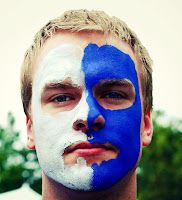 It's been a rainy semester here at Duke. As a result, I've become quite the connoisseur of umbrellas. I have one for light, daily use (black), one for heavy rain and heavy wind (blue and white), and a recent acquisition: one for everything in between (rainbow-colored). And while the heavy blue-and-white umbrella is by far the most durable choice, I've tended to choose to tout the rainbow umbrella. First, because it's pretty (there's a pic farther down!). Second, because, well, I want to be visible.

When I came out, it really took a while for me to decide how big a part of my identity it was--it's a daily process, really--okay, so I'm gay--what's next? Following the bridge incident this year, Blue Devils United ordered rainbow flags for students to put up outside their windows to show support for and solidarity with the LGBT community. I put mine in the window itself, so when I have my lights on it looks kind of like stained glass from the outside (photo: Oli Wilson). I think it's really important to show people that this is campus that's affirming of LGBT individuals (or even if that's not entirely the case, I think that if we give off that image, it will gradually become a self-fulfilling thing). It's the same with the Love=Love shirts.

Each year on National Coming Out Day, the LGBT Center, in cooperation with the various LGBT groups on campus, gives out free Love=Love shirts in various colors--1500 shirts a year. They're usually gone within an hour or two. LGBTQA students, faculty, grad students, and community members wear the shirts around campus. It's a pretty rare day when I don't see at least two people wearing them and it's really heartwarming to see them.

Visibility is something I think about and struggle with a lot. If I wear my Love=Love shirt to yoga, will I be labeled gay for the rest of the semester? Will doubles yoga forever be awkward? (well, okay, doubles yoga is pretty awkward anyway, but whatever.)

Earlier this semester, when it was pouring and I was stuck in the Bryan Center without an umbrella, I bought the new (rainbow) one so I could walk home without getting soaked. I had seen a friend carrying one the week prior and really liked it, plus I just thought it made sense to get one to be visible. Later in the week, I was walking back to my room after Vespers rehearsal and got out my umbrella for the walk. A friend of mine--a guy I consider to be pretty progressive--looked at my umbrella and said something to the effect of, "That's a little excessive, isn't it?" (photo: Sean Dillard) 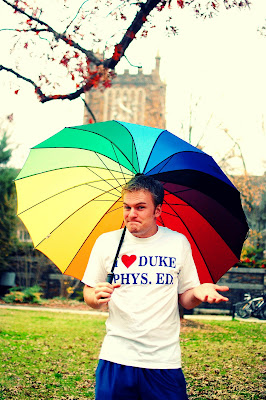 Well, is it?
Is carrying a rainbow umbrella, as a guy, broadcasting your sexuality? I don't think so. I've gotten a few ambiguous looks while carrying it. But come on! It's a nice-looking umbrella, one of the few available at the Duke store. I don't have to be gay to carry it, right? I mean, granted, we're a pretty homophobic society, but come on. They're colors. Are we really that afraid of Mr. Roy G. Biv?

I also wear an LGBT Center button/pin on my backpack. This one makes me even more nervous. I tend to turn it around when I sit down on the bus so it's facing me. (though, the extreme awkwardness necessary to turn a button into a confrontation will probably always prevent people from talking about it. Just imagine, "Yo, this guy has an LGBT center pin on his bag. Heh, what a fag," is the most graceful way I can imagine it, and, well, clearly, that interaction fails).

Yeah, I wish we lived in a society (or a campus, even) where it'd be commonplace for straight guys to overcome their homophobia enough to do some of the same things I do. But even if they aren't homophobic or being afraid of associated with the LGBT center, being an LGBT activist is simply less likely to be as high on their priority list as it is on mine. And while plenty of my ally friends wear Love=Love shirts, no straight boy around here would carry that umbrella or wear that pin. And I'm okay with that. I think it's good for people to see a guy who's not afraid to carry a rainbow umbrella, regardless of whether or not he's gay. (and just recognizing that sure says something about masculinity...)

I had a long conversation with one of my priests last semester, and he essentially told me that he thought I should be as open and out as I was comfortable being, because it would be healthy for our Catholic community to have someone so open and comfortable both in his role as a gay man and as a Catholic in a leadership position (I'm the co-coordinator for music ministry, so I'm up front with the choir every weekend). And I think I agree. I'm reasonably comfortable with myself (and growing more so each day)--why not use that to help our community and our campus grow?

I've heard the argument that being so visible or being a "queen" (or a rather effeminate gay man) can be harmful to our cause, that it will cause discomfort and push people away. I somewhat disagree. I think that, yes, perhaps some extremely homophobic people will be pushed away--but they're already homophobic and probably still will be tomorrow. In their case, it won't make much of a difference either way. But as I've talked about before, I think the best way to advance our position in the community is to personally connect with people, to allow dialogue to happen and to be comfortable talking about myself. If I'm visible, I make such dialogue more likely--even if I'm not involved--and that's something I'm happy about. If people think about it, I'm confident they'll end up on "our" side, so let's keep people thinking about it.

So yeah. Lots of rain this semester. All my shoes are perpetually muddy. Thankfully, the weather's pretty nice today. If it goes foul tomorrow, though, you can trust I'll be getting out my rainbow umbrella again.
Posted by Matt at 4:00 PM