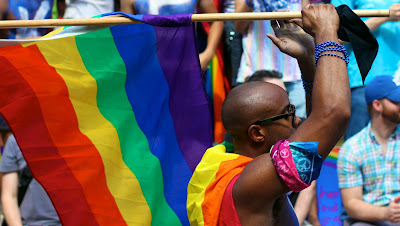 [Ed. Note: This year, we've decided to recap BDU and Center events with pictures and firsthand accounts. Our first-year friend Matt B. was awesome enough to write these up for us, because it's what people who are The Best do.]
As someone from outside the South, I was totally surprised that North Carolina even had a Pride parade, much less one as well-attended as yesterday’s event. The News & Observer, the Triangle’s local paper, estimated that roughly 10,000 attended or marched in the parade. It was basically Gay Christmas.
Starting in front of Duke’s East Campus and wrapping around the 9th Street district, the parade consisted of about 20 floats among 100 marching groups and almost 200 vendors. Organizations represented ranged from UNC at Chapel Hill’s GBLTSA to Raleigh’s Legends Nightclub. As usual, however, Duke’s float was the best, thanks in no small part to Justin Harris, who organized the float, and Chris Perry, who probably saved several people from dehydration with a valiant Dollar General water run.
I was lucky enough to find space on the float, and it was amazing. Several times during the parade we were warned that our dancing was compromising the structure of the float. You know you’re doing something right when you’re dancing so hard that you might break the float. From the glimpses of our reflection that I caught in the windows of 9th Street storefronts, I feel qualified to say that we looked fantastic, all rainbows and body paint and Love=Love shirts.

Sign highlights:
“All the cool Duke girls are lesbians”
“Bisexual: it’s the best of both worlds!”
“When rapture comes, all the fun people will still be here!”

Regardless of how liberal Duke may (or may not) be, Durham is still in the Bible Belt and because of that I was expecting religious organizations to have a huge presence at the parade. They did, but not at all in the way that I imagined. I was pleasantly shocked to find the religious role in the parade was less “GOD HATES FAGS” and more “(Insert-church-name-here) loves gays!” There were a few protesters, but their relatively inoffensive arguments were widely ignored. Furthermore, I’m pleased to report that as the Duke float passed their somber-faced contingent, a certain Lily Allen song just happened to come on over the speakers…

After the parade, I ran right to the shower. I did my best, but I have a feeling I’ll be finding glitter in weird places for the next week or so.
Posted by Matt at 6:47 PM