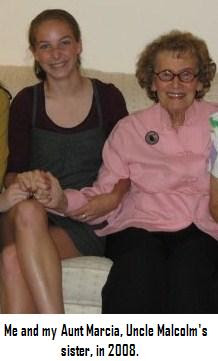 I wasn’t able to get my picture taken for this year’s Day of Silence, which is unfortunate, because I’d already decided on what my poster would say this year: “Today, I’m silent for my Uncle Malcolm.”

I’m silent to honor the memory of my Uncle Malcolm, a memory which has largely been intentionally forgotten and almost erased from my family’s history.

When well-intentioned people criticize the Day of Silence as being unproductive, I think they are taking the “silence” thing too literally. As I wrote last year, today is not really a day of silence. More accurately, it is a day of not talking. For exactly this reason I write this blog post to protest the silence of my family.

My mom was the first one who told me that I had an uncle who’d been murdered for being gay. I was in middle school then and she told me everything she remembered ever overhearing about it, after all, the adults never spoke about it in front of her. Just about everything else I know, I know from my mom’s first cousin. There is a lot that my cousin still does not know, while other details deceive her memory. What remains is the story I’ll tell here.

Sometime before Stonewall (1969), my grandfather and his older brother traveled from Philadelphia to New York City, where they identified Malcolm’s body at the morgue. Days before, my Uncle Malcolm had been beaten and murdered by two teenaged guys. Malcolm loved to cook. He and the two people who killed him had met at a bar, before going back to his apartment so Malcolm could cook for them. What transpired after that, I don’t know, except that he was naked when they found his body and that he’d been beaten so badly that his body was barely recognizable.

By all accounts, Malcolm lived a bohemian kind of high life and sought to enjoy every day. He was a successful advertising executive (Mad Men, anyone?) and spent a few years living in Japan. He sometimes brought a girl, Cookie, to family functions; she was a lesbian. I’m also told that Malcolm was handsome, had “smiley eyes,” and didn’t like to be interrupted. Born as Malcolm Goldberg, he sought to honor his ancestors by legally changing his last name to “Gurbarg,” the name his mother brought to the states with her before it was changed at Ellis Island.

Unfortunately, while that may be all I ever know about him, it’s only half of the story. Malcolm led a double life for the 40 years that he lived. Before his murder, nobody in my family except Malcolm’s mother knew that he was gay.

The men who so tragically interrupted Malcolm’s life were convicted, though apparently no one from my family went to the trial (which really irks me).

Today, Malcolm, I honor and remember you. With my silence, nobody can interrupt me. And with this blog, your story will no longer go untold.
Posted by Risa at 8:00 AM