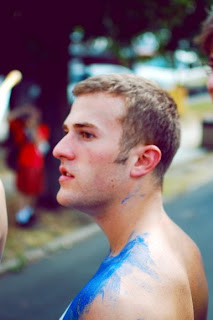 I’m coming out again. The title says it all. I’m a bitter gay.

In some ways, saying that is a lot harder than saying I’m gay ever was. As someone who has no reservations in disclosing my sexuality to almost everyone (I even came out to my Russian host mother this summer… whoa), I feel like it’s my responsibility to carry myself with an air of HAPPPINESS and EVERYTHING IS GREAT-NESS. Academically, socially, and extracurricular-ly, everything is.

The realization of my bitterness started during conversation with an ex and our mutual friend. Mutual friend was talking about her frustrations with a guy she had been seeing. It wasn’t the first time we had such a conversation. I made some kind of remark that led my ex to call me bitter. I think he’s right.

I’m bitter because I have so fewer options than my friend has. I’m bitter because the way I go about meeting potential dates has to be completely different from the way she goes about meeting potential dates. In order to make a connection with someone I might be interested in, I feel like I have to be in the right context. That is, I can’t just see a guy anywhere, find him attractive, and approach him. I have to know he’s interested in men, or else I risk hitting on a straight guy (which has happened a couple of times recently… yikes). It’s great to be comfortable enough with myself to put myself out there in those situations, but it’s disappointing and almost humiliating to be wrong. When I DO meet a guy who is open about his sexuality (i.e. at an LGBT Center event or at a club), I automatically pigeonhole him into some kind of “I’m interested” or “I’m not interested” category. Don’t get me wrong; I know that first impressions aren’t always accurate, and I’m certainly not against making friends. However, even though I know that the LGBT Center stands against the idea that students only go looking to meet someone for their next date or hookup, sometimes, I am, and I’m not afraid to admit that. Where else?

I’m not looking for love, necessarily. I only want attraction and a connection, and I wish attraction and connection could surprise me more often rather than coming from someone whom I already know is an option. I am bitter about those dynamics. There are just fewer fish in the sea for me.

This isn’t the biggest deal in my life right now. Even though I feel this way and may always feel this way, I know I’ll eventually find something. I still stand by my mantra that life is better as an out gay man than a closeted one. I am a happy guy; the content of this blog post is just something I’ve been thinking about for a while. I highly doubt I’m alone in thinking the way I do, but feel free to disagree.
Posted by Ryan at 8:00 AM