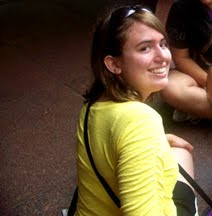 [Editor's note: Please welcome our newest writer, Liz! We are so glad to have her contributions on the blog.]

Three days into my Duke experience, I walked through the Organizations Fair set up in the Plaza with my parents. My mom, knowing my utter ambivalence when it comes to seeking out human contact, diligently made sure I picked up flyers for a few of the groups, like the Arts Fair and especially CAPS. I promised to reach out to at least some of the groups, we went into the Bryan Center, said goodbye, and they left.

After the appropriate emotional flailing of being left on the East Coast alone, I immediately returned to the Plaza and went to the Center’s booth, which I had been unwilling to approach earlier.

After tinkering with the idea starting sophomore year of high school, I’ve thought of myself of bi for almost two years now. Most of senior year in high school was spent in an intermittent internal battle of whether or not to come out. I’d ask myself why it even mattered, what was the worst that could happen? I was leaving in the fall, and I wouldn’t have to deal most of those people anymore. I planned to tell my family and friends and let the respective rumor mills do the rest. I felt calm, assured. With a plan, I can handle anything.

Then I would ask myself why then would I bother coming out? Why not just stay comfortably where I was and avoid being known as the out kids were, solely by their sexuality? Parts of my very close extended family were not going to react well. It wasn’t like I was going to date anyone by the end of the year anyway; no one needed to be told. The plan became to come out to them while I was at college, where I would be safely many states away from any sort of negative or awkward fallout.

When I got accepted here, I did all the researching into the different clubs and activities, running through all the websites and Facebook groups. I found more than I could ever hope to join and talked nonstop about them to family and friends. I found this blog, and the Center, and Women Loving Women, all way before that fair on the Plaza, but they were the things I never mentioned to anyone. I followed this blog for most of spring semester and read the backlogs over the summer, carefully monitoring if anyone was around when I was doing so. I made more plans. When I walked up to the Center’s booth that first week at Duke, it was almost surreal.

Now that I’m in college and involved with the Center, I find my original plan of visiting home one holiday break, dropping my payload, and flying away to be less than ideal. My closeness with my parents has become a double-edged sword. I find the idea of simply telling them over the phone or at the end of one of my visits irresponsible. They’ve always supported me and given me great advice and I feel that I owe them more than that. I owe them a chance for us to sit down, for me to explain, and take their questions.

Easier said than done. I share everything with my family. On the phone, I’ll forget and mention I have a meeting later that night and they’ll ask what it is, not knowing this throws me into a mad scramble for a cover story. While I can explain away the rainbow flag in my dorm room as being a symbol of my support for LGBT students, Women Loving Women implies a different level of LGBT involvement.

So I’ve found myself at one of the most stressful times in my life (even without taking into account coming out) without a viable plan. Currently, I’m considering things like ‘playing it by ear’, which is a horrifyingly vague concept for me. But as bad as the idea of not knowing exactly how or when I want to come out anymore is, I’ve never been more grateful to have found the Center and the resources there or this blog. They all give me the security of knowing that whatever my eventual plan is (or lack of one), there are other people out there who understand and relate.
Posted by Liz at 8:00 AM