The Magic of Acceptance 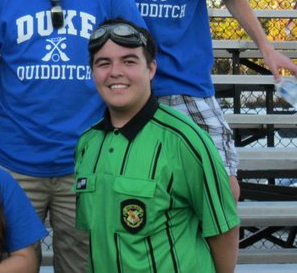 As I sit home for Thanksgiving break, stuffing my face with all of the leftovers, I have had a lot of time to reflect on what I should be thankful for this year. If you remember my last post on the Sophomore Slump, I can definitely assert that it exists; I've been feeling it for the past few months. However, this post is not about that. This post is about what I have been doing to get over the Sophomore Slump. This blog is called Our Lives, and yet, I have not had the chance to talk about an extremely important activity in my life: Quidditch. Yes, I am referring to the wizard sport with quaffles, bludgers, snitches, and brooms from the Harry Potter series. Yes, it exists, and yes, it is amazing! Perhaps the most accepting community I have found in my time at Duke has been the quidditch community all around the world, but especially my team. I will get to my team eventually, but first I want to talk about how quidditch promotes acceptance and equality.

The International Quidditch Association (yes, it exists) has a very strong mission for inclusiveness and equality that I find admirable for an organized sport. While I can spend an entire post explaining the rules of quidditch (you can always ask me if you are curious), I want to emphasize our gender rule, which states:


"Each team must have at least two players [there are seven total players] that are of a different gender than the other players. The gender that a player identifies with is considered to be that player’s gender." -IQA Rulebook 5.0

Quidditch is the only organized sport which is required to be co-ed (to my knowledge), and as of 2012, this rule will be modified so that each team will be required to have at least three players that are of a different gender. This rule has manifested into a core mission of community building in the IQA called Title 9 3/4, which is a combination of Title IX and the train platform, Platform 9 3/4, where the Hogwarts Express is located (and with the new 3:4 ratio, Title 9 3/4 is too perfectly named). I sit on the Rules Council for the IQA, and I have just been so pleased with the IQA's stance on gender equality. Having men and women play in the same sport, in my opinion, helps to aid in the mutual respect of each other for their athletic abilities. Many of the toughest players I've seen have been women, and I know my views have been modified while watching quidditch grow and seeing how strong the players are, regardless of gender. In addition, I was very pleased when we added the second clause of the gender rule. To have this rule and have it be explicit written demonstrates the IQA's commitment to equality within the transgender community, and again, I believe this is unparalleled in any other organized sport.

In my time participating in quidditch for the past year and a half and now recently working with the IQA on referee development, I have had the chance to meet a lot of people from around the world that play quidditch. I cannot find one stereotype for these quidditch players: some are Harry Potter fanatics and others haven't read all seven books. Some played football in high school; others haven't played a sport before. Some are 6'5'', others are 5'0''. I have noticed that there are a fair amount of LGBT players in quidditch, which I have found to be uplifting. In general, many would agree that sports aren't always the most LGBT-friendly, but in my experiences, it is so different in the IQA. In fact, for Valentine's Day this past year, the IQA asked teams to submit quidditch couples, regardless of sexual orientation, and out of the 10 selected couples, I believe 3 of them were same-sex couples, which I thought was amazing! Perhaps J.K. Rowling taught us a lesson in equality and acceptance in the books that has permeated the sport. For me, I've always felt like the oddball growing up. I was never athletic and other than soccer, I wasn't really interested in sports, which made me different from most of my guy friends. Reading Harry Potter put me into a world where I wasn't that oddball and I was accepted for me, not the sport I played for muscles I (don't) have. I dreamed of playing quidditch while growing up, having the wind rush through my hair as I would fly through the air protecting my team from bludgers, and I only wished that would be reality. Due to the creativity of some people at Middlebury who also shared my dream, we now have quidditch. Many quidditch players feel the same way I did growing up, and when I'm surrounded by the sport, I don't feel alone in my sentiment, I only feel acceptance.

But mind you, I have only been involved with the IQA this year. Most of the time I have spent with quidditch has been with my team here at Duke, where I have felt the most acceptance. When I came to Duke last year, I struggled to find my place. I found it very difficult to get involved with the LGBT community at the beginning of last year, which was definitely disheartening at first. However, I found quidditch, and a group of friends that is by far my closest friends at Duke. Maybe it takes running around campus with brooms between our legs being mocked on campus to bring us close together, but whatever it is, it has worked. When I am with my team, I can truly be myself, something that I cannot say for many other groups of people here at Duke. Granted, being myself usually involves yelling at everybody since I'm the referee, but nonetheless, my team knows the real Cameron, and that Cameron is independent of any label.

Quidditch has been magical for me. My team, my best friends, made me want to stay at Duke. So this year, I'm thankful for the team. I've never had such a public forum to thank them, so thank you all. Our trip to New York for the Quidditch World Cup two weeks ago was by far one of the best weekends ever, and all of you made it wonderful. Thank you for dealing with my time constraints and my yelling practice after practice, and thank you for accepting me as one of the team even though I am the lone referee.

We talk about community so much on this blog, and we can spend so much time talking about the LGBT community, but we cannot neglect the other communities we associate with at Duke and in the world. My community may be different from your community, and that's okay, but let us not forget the support we have around us.

Duke Quidditch will be hosting the 2nd Annual Intercollegiate Yule Ball of the Carolinas next Saturday. Come and join us to be a part of the magic that I've been a part of for past year and a half.
Posted by Cameron at 8:00 AM