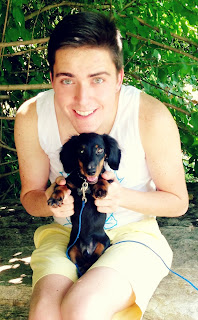 For fall break some of my friends and I ventured to Atlanta, Georgia for Pride. It was probably one of the most enjoyable weekends of my entire life. I must admit I expected Atlanta to be homophobic and backward, but instead I was greeted by a lively community, wonderful allies, and friendly people. It was the first pride I’ve ever been to, since the Triangle pride parade always takes place while I’m warming up with DUMB for the football game on Saturday.


I know a lot of people take issue with pride and pride parades. Their reasoning is sound – why should we take pride in something if we believe it isn’t a choice; if it’s biologically predetermined? They argue that pride festivals exhibit the very worst of the gay community – the femininity, the promiscuity, and the alcoholism. I understand why one might think those things – I would have agreed with some of them in the not-so distant past, but now I realize that very little of those arguments hold any water. Sure, pride parades may be displays of “nontraditional” behavior – men in dresses, women in trousers, and everything in between, but I don’t see why that’s anything to be scared of. Instead of judging, we should be applauding our peers for being brave – for being themselves - regardless of whether we choose to emulate them.

In response to allegations that pride parades are merely one, decentralized orgy, I offer this: saying that LGBT people are promiscuous, bar none, is a vast overgeneralization; promiscuity occurs regardless of sexual orientation. One need not look any further than Shooters on a typical night to realize this. The belief that LGBT people hook up more than their straight conspecifics is outdated. Various societal disparities between people of LGBT-status and our straight peers are at work, like oh, I dunno, how about the fact that we’re not allowed to get married and form legally recognized monogamous relationships? It is not far fetched to make the connection between the marginalization of the LGBT community and drug and alcohol use, which are used to escape, however temporarily, from our oppression. (As I noted in my last post, there isn’t anything inherently wrong with hooking up, as long as it’s mutually consensual, so no hate on those who choose not to participate in monogamy.)

This post wasn’t supposed to turn into a social commentary, so sorry for that. I don’t mean to get all preachy.  In sum, pride parades are not simply spectacles for drag queens and dykes, though they are a welcome and much loved part of our community; no, there are also families of all kinds, allies, LGBT-affiliated churches, and parents of LGBT people, all coming together in support of the LGBT community to take pride in who they are and what they believe.