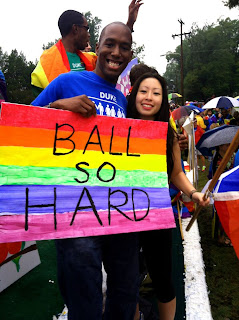 So Saturday was the NC Pride Parade. If you were cool enough to attend you know it was an awesome event filled with all things queer and if you were not able to attend, rummage through Facebook and try to live vicariously through the photos.  This was my first pride parade, and it forced me to reflect on my two-year journey from shame to pride. Witting this post about Pride reminded me of an anonymous post over the summer that pretty much asked “what’s the point of Pride ?” The anonymous poster believed that we don’t have the right to show pride for the accomplishments of other, and that in general we should not express pride for innate attributes like being LGBT. At first I got all defensive about Pride, but then I decided to really reflect on gay pride, and ask myself why it is so important to me.

For me, Pride is not only about celebrating the struggle and accomplishments of those who came before, but also celebrating my own transformation. In talking about Pride, I think it’s important to know the history (I’m a history major so I always think the history is important).  The first Pride parade was held in 1970 to mark the anniversary of the Stonewall Riots.  Last week a close (queer) friend of mine admitted that he didn’t know what stonewall was, and that confession pushed me into a deep sense of depression. So if your reading this and don’t know…There is a Wikipedia page calling your name. In a nutshell, Stonewall was a two-day riot outside of a gay club in NYC, which sparked the modern gay rights movement. (Sorry for the history lesson, but it is LGBT history month) The parade that happened on Saturday owes its roots to a stand some brave queers made 43 years ago, and I do think that’s something to be proud of.  I am proud because they stood up (and attacked the cops) so that I could live in a world that was a bit more tolerant.

The second aspect of Pride, is the personal pride I have for my own journey, and the journey of those around me. It has been a long and difficult journey from a dark closet to a float in a parade. For me Pride was a way to celebrate my own transformation into a person that can be proud of who I am. Even more than that, Pride is an opportunity to be validated by others in a way not commonly experienced. I spent most of my life being told that queer was wrong, but on Saturday I had thousands of people cheering me on telling me that who I am is beautiful.  I was proud of those who paved the way, proud of my own journey, and proud of the validation I receive from my community. Honestly…being queer is Great! In addition to multitude of Rainbows and natural birth control, we have a community that is strong, loving, and validating. That is something to take pride in, and that’s why I braved the cold rain to ride down a float dancing to Gaga.

(In my kindergarten teacher voice)...And remember ...You can't have a rainbow without rain