Want to know a secret? 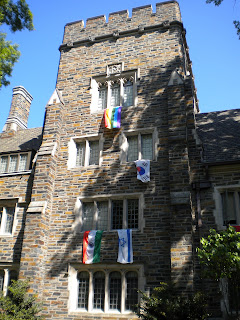 Let me tell you secret: my name isn’t Liza. You may say, well “Liza,” that’s kind of a crappy secret, because I knew that already. In fact, you sent me this link yourself, from your e-mail address that has your real name attached to it. Failing that, you included an absurd amount of identifying information in your previous post. How many Duke senior Student U teachers from Durham are there? One? How mysterious. So why the pseudonym?

I’ve named myself after a character from a fabulous Young Adult novel from the early ‘80s called Annie on My Mind. I could certainly profess my love for YA novels for hours, particularly this one, but that’s a topic for another post—or probably another blog altogether. The real question is, why use a pseudonym at all? I initially rationalized it as professional concern, a hedge against discrimination. I did not want grad schools or employers to google my name + Duke and get this. And while that may be valid on some levels, it’s not really the truth. I’m using the pseudonym because I’m hiding. But who or what am I hiding from?

Let me give you some context: in my life there are two ‘eras,’ so to speak—before I was gay and after I was gay. This is a pretty ridiculous and inaccurate way to look at it, but it’s how I think of it nonetheless. I’m sure I had the capacity to be romantically inclined towards another girl in the ‘before’ era, in fact, I’ve reanalyzed certain past friendships and recoded them as crushes on girls. But this doesn’t change the fact that I hadn’t done (or thought) anything consciously, romantically gay before a certain point and no one would have identified me as such before that time (even if I did set off their ‘gaydar’).

I had no archetypal coming out experience. I didn’t ‘feel something was different about me’ ever since age 11. I didn’t feel confused (at the time) about my feelings towards female friends or acquaintances. I wasn’t part of my high school’s gay-straight alliance. Hell, I’m not even sure I supported gay marriage, since the Democratic Party wasn’t endorsing it at the time.

Of course, something was different about me. I was the stereotypically gender-nonconforming kid, the tomboy who never grew out of it. But, at least in my particular school and neighborhood in Durham, no one seemed to care if a little girl dressed up as Darth Vader for Halloween, or if the captain of the girls’ basketball team wore basketball shorts to class. So I didn’t register it as all that much of a meaningful difference, and I certainly never thought to extrapolate to sexual orientation.

The tricky part of my transition in personal eras is that my turning point was right smack dab in the middle of college. Literally the last day of sophomore year. And I didn’t muster up the courage to walk into the Center with my best-friend-turned girlfriend until the middle of junior year. So the majority of people I have met in college were initially introduced to pre-gay me. And I am hiding from those people.

Now that I’m more comfortable being open about this aspect of my life, I can see where new acquaintances stand from the beginning. New hallmate gives me a dirty look when I hold my girlfriend’s hand in the common room? Forget you. (For the record, nothing like this has ever really happened to me. Ironically, I’ve been called a dyke exactly once in my life, at night on the BC Plaza—in the before era—when I had my arms draped over the shoulders of two female friends). For me, what’s infinitely worse than some anonymous glare is the prospect of a fundamental change in relationship with someone on the basis of revealing my love for my girlfriend.

I’m hiding from that. From teammates, classmates, and hallmates who have graduated or are still here. In particular from those who have made subtly homophobic remarks in the past. I don’t want this column to make its way to them through the Facebook grapevine with my name attached. I can tell myself that these people aren’t my real friends if they can’t accept this significant (not to mention happy) part of my life, but I still have this extreme aversion to shattering their straight image of me, especially if their regard for me rests, in some small part, on an unconscious foundation of assuming I’m not gay. Has anyone out there had similar experiences? Can you ever stop caring about what important people from your past think?