Well here we are, January 28, 2010 and back to the regularly scheduled programming for my Thursday blog entries. The next two weeks will focus on the illustrious (although freshman) Gordon Wilson. Our conversation was enlightening for me, partially due to his positive outlook on attending a southern university and being out and gay, and partially due to his very apparent adoration of public speaking and politics. This smiling peer of ours is social through lots of campus involvement and seems to know who everyone is, and quite frankly intimidating to me since I can be kind of a recluse. But you don’t want to know about that. You want to know about Gordon!

One of the biggest differences that Gordon noticed between his high school and Duke is the number of out lesbian couples. Although he mentions “there was never a gay couple at [his] high school,” the girls were more audacious. I was surprised at this admission and how this topic keeps cropping up over and over. Even within the past few days, my women friends and I have discussed the hidden pockets of queer/lesbian/bisexual women, and how we’re dying to know who you are. It’s definitely been a hot topic in the Center. (Shameless plug: There is a Women Loving Women meeting in the Center tonight!) Sorry, back to Gordon, but he was the one that brought up out women in the first place.

Due to his involvement with politics (in high school and here at Duke), which will be discussed further in depth next week, Gordon often faces the question of his identity with some caution. He identifies as a gay man, but as someone who plays the role of a public figure as well, the general population tends to let that be the only marker on the radar. In high school, slander was used against his sexual orientation to make him lose a position. Getting outed in high school made him deal early on with a lot of issues, but has also helped him come to terms with a lot of his internal struggle before coming to Duke (some processes that occur much later for other Duke students, myself included). He adds, “but I still get this tension and get this apprehension, but I think it’s the politician inside me that wants to appeal to a broad range of people, and wondering if [my orientation] would stop someone’s affiliation with me. My desire to be accepted and to appeal to a large group of people was perhaps derived from being gay, but initially, it was perhaps out of, ‘if they vote for me, that means they like me, and they accept me, and I’m okay’ you know?”

ure many of us do know what that anxiety of acceptance feels like. The Duke students striving for perfection within an intense academic environment of course adds to this. I want to encourage you all to share your own stories of how you identify acceptance and what that looks like in your world.

But perhaps more importantly, I wanted to share Gordon’s very positive outlook on being out at a school like Duke. Maybe it is his inner politician speaking, but this is what he has to say:

Here they [Duke students] are more willing to get involved, because our community has more space to grow. We have room to change. In some other schools like NYU, everyone is out and having a gay old time because they don’t feel the need to get involved and grow. There is so much of the world that needs change, we have an interesting opportunity to take this to other parts of the world.

Clearly, Gordon wants to be part of the change he talks about. Like many students, his favorite LGBT event on campus is Coming Out Day on the Plaza. It gave him a chance to be more out and promote visibility on campus. He’s very modest about his active involvement in his organizations, but this does ultimately lead him to getting to know a lot of people. Fortunately for us, Gordon feels the responsibility of being an out role model for other students who are still coming out of the closet. So one of this major goals this semester is to try and push his own limits for speaking up more and being a better ally for the entire community, as well as an out gay male. There is a moment that haunts him from high school, when he didn’t speak up for a female classmate who was being hassled and called a dyke. Gordon too has been in moments where no one would stick up for him when he didn’t feel like he had a voice. “Helping someone else feel comfortable,” Gordon confessed, “makes me feel more gratified than getting an A or getting someone’s vote.” 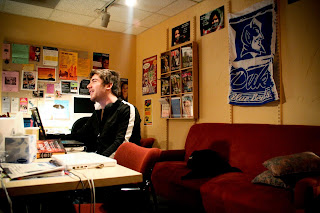 But reaching that level of comfort isn’t easy. While doing this interview, Gordon and I were sitting in the Dillo—the first superpublic place that I’ve conducted one of my interviews. I debated moving to a quieter location out of earshot of other students, and at this point in our discussion, Gordon brought up his slight discomfort regarding others around us overhearing the interview. I like my interviewees to feel at ease and in a safe space with me, but it also sparked Gordon to say that he wish he felt more self assured and identified it as an area of growth for himself.

Please come back next week to read more about Gordon’s experience at PWild and his other interests outside the realm of the LGBTQA world.
Posted by Summer Puente at 9:00 AM

Labels: Columns and Features, coming out day, Gordon Wilson, Interview 1.1, out at duke, out in high school, politics, Summer