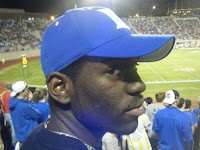 Okay, here we go. I am gay, out, and in a fraternity. Best part about it: it’s not a problem at all. The brothers knew about my sexuality long before I rushed and pledged. I was worried that once knowledge of my sexuality spread, I would be blacklisted and never invited to come around again. Much to my surprise, not long after my sexuality was revealed, I was invited to go to dinner with some of the brothers. I agreed, hesitantly, wondering what in the world this could mean. Were we going to have “the talk”?! (DUH Duh duh!) We have dinner. The subject was not mentioned, not referenced, not even hinted at. I released a sigh of relief as mighty as the gust from Zephyr that killed the beautiful Hyacinth (Can you tell I love Greek mythology?). My times of hanging out with the brothers continued. Fast forward to rush. Once again, my suspicions rose that maybe I could hang out with the brothers but only as a friend, never a brother. On a last minute whim, I rushed. My heart beat at the speed of light at each event, waiting for one of the brothers to tell me what I knew I would eventually hear. I remember anxiously staring at my computer on Sunday nights, refreshing my email every 10 seconds, hoping that I would get an email inviting me to the next round of rush, but knowing that I would never get it. Again, the brotherhood proved me wrong. I received a round 2 invite, followed by round 3. Then came the moment of truth… bids. I successfully made it through all 3 rounds of rush, but would that matter? After all, it could have all been for naught if I did not get a bid to pledge and eventually join. For that entire day, I couldn’t breathe. I couldn’t eat. I was sick to my stomach. I couldn’t walk because my knees were weak. I couldn’t write because my hands were shaking. The same thought ran through my head all day: No fraternity wants a gay guy as a brother.

I broke into tears that night. I received a bid to join the Beta Lambda chapter of Sigma Chi. They didn’t care. THEY DIDN’T CARE!!! They wanted me to be one of their brothers! Tears of joy streamed down my face as I quickly ran downstairs to my best friend’s room to tell her the good news. I, Ashante’ Jamar Biggers, was going to pledge a fraternity.

That was a year ago now. I’ve enjoyed every single minute with my brothers. They’ve been my friends, my support group, my vacation buddies. They’ve been there through my happy times, my sad times, my confusing times, my stressful times, my blissful times. I couldn’t have asked for anything more.

So why tell you my story? Because I want everyone out there to know that yes, there is homophobia in the Greek community, but it’s not everywhere. You can find a pocket of sunshine breaking through the clouds just like I did. You just have to find it. I feel very secure about my sexuality thanks to the help of my fraternity. I feel very comfortable inviting a guy to our events. The thing that gives me the most grief is getting up the courage to ask someone. I know that if I bring a guy to a date function, we won’t have to face the stares and whispers. We won’t have to be the awkward couple that no one talks to. We could be just another couple in the crowd.

So please, for me, don’t think of all Greek organizations as homophobic because they are not. I beg of you to not generalize all Greeks as the same because we are not. I am an individual just as much as the next person. Think of the negative stereotypes that you face everyday and how you feel about them. I feel the same way.