An Ode to Mehdy 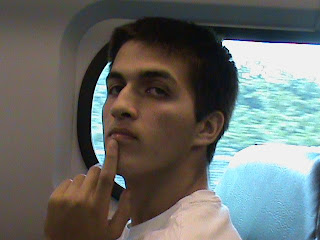 This past Sunday, June 5th, one of my good friends from high school died after suffering brain damage due to a fall. I’m not going to say that he was my best friend, because we didn't spend all that much time together in high school, but I will say that he is someone for whom I had a great deal of respect and a great deal of love. Moreover, he is someone who took me completely off guard one day, a year after I graduated.

At my high school, we have a very close-knit alumni community and we invite all alumni who are around to come visit in mid-May. As a recent alumni, I came back to visit, and amid the maelstrom of chatter and hellos and hugs, I got a chance to see Mehdy. I told him how much fun it’s been watching him (via Facebook events, etc.) implement multicultural programming at my high school in a way that I never could’ve, I told him how wonderful I thought he was, and I told him how excited that I was for him to go to college next year (at Harvard of all places, no big deal). All of that was expected, and didn’t surprise me really at all.

What took me off guard was the facebook message that I got from him a few days later, and I cannot think of a better way to honor his memory than with his own words, so I’m re-posting our exchange. I apologize if it’s long, but it shows so much about who he was as a person--about his capacity for critical analysis, for deep introspection, and for love:
* * * * *
Hey Jacob,

I really hope you are doing very well by the Grace of God.

I guess, I wanted to say to you thank you. You've placed on me a lot of cognitive dissonance, and you've made me confront my intolerance and my homophobia. I faced some stress and I think the truth can be bitter, but it needs to be embraced: homosexuals can be great, magnificent human beings. And, I guess, I will admit that parts of it remains, but it no longer pervades my heart like it once did, and even at this point, I'm battling it. Hatred is a beast that if you let in your heart, eats (quickly or slowly, but eventually) your beautiful essence up. So thank you. A lot. Thank RCHS. A lot. And most of all, thank Allah (ST). A lot. For everything.

I want to talk to you about homosexuality though. I have overcome my hatred and I want to understand now in clearer terms why I may or may not oppose homosexuality. As you probably know, Islam is against it, according to most scholars. I am a Shia Muslim and so first off, I am interested in hearing what you have to say about Iran's stance on trans-sexuality. I heard you mention it once in Social Justice at the beginning of your senior year, and I became very interested. Unfortunately, I got caught up with other things, but I am very fascinated, esp. now. Here's the wiki: http://en.wikipedia.org/wiki/Transsexuality_in_Iran

This is Hamza Yusuf: (link)

This is Tariq Ramadan: (link)

And, by God's will, He has manifested these Names in physical and psychological ways. That is why it can make sense that the spiritual self is connected to the physical, genetically composed self. Now, who are homosexuals? How do they work into this human spiritual structure? And I feel that homosexuals can be genetically pre-disposed to be attracted to the same sex. Homosexual tendencies can and do exist for at least two reasons that I can think of and it is very natural to be attracted to the same sex.

Now, back to the categories of Divine Names. In Islam, Muhammad had said Marriage is half of Islam and I feel that it can be seen very easily why in the inherent duality in humanity. The mark of a successful Muslim's life is the realization of Oneness and in order to attain that Oneness, heterosexual marriage is very necessary in order for men and women to transcend their duality. With this metaphysical understanding, I do feel that that is why Islam and I think possibly most religions believe that homosexuality is natural but been placed there for us to struggle with and eventually overcome to meet our Beloved. And I feel that individuals with homosexual tendencies are similar to individuals with alcoholic inclinations, in that it is natural for them to (strongly, for some) desire that thing, but in order to fulfill our purpose of creation, we need to not indulge.

So, all of that was not well-developed and there are probably many mechanics issues, and I apologize. I feel that mutual respect is very important in facing any issue and we have more in common than we differ in. Thanks again for everything and I will leave you something to ponder over: (link)


Well, to start off, the Lupe Fiasco video rocks. I miss the days of socially conscious hip-hop and it's refreshing to hear it.

Secondly, I want to maybe preface everything I say by saying that I have a deep--albeit for the most part uninformed--respect for Islam. Muhammad has wisdom that we can all learn from.

Also, I'd like to strike a deal with you. I will help you to learn about and discuss homosexuality if you will help me to learn about and discuss Islam. In some ways, it's shocking; you'd think that I would know a lot about Islam as an Arabic student, but I haven't learned very much at all in my classes and I would love for someone to tell me more about it. The last thing I want to be is ignorant.

Another thing that I definitely want to express is that you are not at all alone in struggling with this. From what I can tell during my experience at the Global Youth Summit, most of my Muslim friends all throughout the Middle East are having this struggle. My friend Said in Morocco, my friend Edris in Afghanistan, and my friend Jessica from Egypt all talked to me about this when we were in London together for the summit. Jessica was so conflicted that it brought her to tears, because for her, she felt that being perceived as anti-gay is but one of the thousands of stereotypes that people had about her as a Muslim woman who wears a hijab. I very much empathized with her in that regard, and I think most people can. So bottom line is that this is a struggle that people are having all across the world.

As far as Iran's policy towards transsexuals, I actually think that in many respects it is a huge step in the right direction towards the acceptance of people who are transgender. It makes the process of switching one's sex legitimate and affordable and in that respect, it is a good policy. What is problematic about it, in my opinion, is that it demands assimilation and covering-up one's past after surgery. I think that view creates some kind of shame about the procedure, when people are not allowed to be open about having it done. Secondly, allowing the procedure does nothing to breakdown the prevalence of concretely defined gender roles, which I think in many ways is the larger problem for people who are transgender.

As to the more theological concerns and questions, I'm not sure if I'm terribly qualified to answer them given my limited knowledge of Islam, but I'll try to address them as best I can. When it comes to viewing marriage as the realization of Oneness, to me it seems that there is room for homosexual relationships. From what you've said it seems that the important part of that Oneness is this transcendence of duality and you've defined that duality as something that exists on the basis of gender, but could that duality not also exist in a larger more human way? Could we, as humans, be fundamentally separated from one another, and the Oneness that is realized through marriage is a Oneness that is created from the connection of two human beings, regardless of gender? For me, that is what is remarkable about love. Love unites people in a beautiful and deeply spiritual way regardless of gender, and thus finding your Beloved is a daunting, but worthwhile task for anyone, gay or straight. I don't know if I've stepped on any toes theologically with that perspective, but it's what I believe about love. The remarkable thing about love is not it's ability to cross the oftentimes arbitrary lines of gender, but it's ability to cross between two human souls and unite them in Oneness.

As for the idea of struggling with and overcoming homosexuality, I have never agreed with that idea. For me to struggle against my homosexuality would be for me to struggle against who I am, against who Allah made me to be. (I hope it's not offensive for me to use the term Allah, personally, I believe that God is one and that Allah seen through Islam is the same God that I grew up worshipping in a Christian church, many paths one destination and all of that, but that's a different philosophical debate in and of itself) I very much believe that Allah creates each one of us in his image, that Allah creates each one of us beautifully, and I see my homosexuality as part of that creation. So I would never struggle against homosexuality. That being said, I believe that everyone, gay or straight, struggles against lust and against the desire to objectify people and see them as sexual objects. But that is a struggle that I believe is universal.

I can't help but feel like this conversation might be better in person. Do you have any free time this weekend or potentially afterschool on Monday or Tuesday? I leave for my ten-week summer placement on Wednesday, so I couldn't do anything after Tuesday, but I'd love to get together and talk more. I have a great deal to learn from you I'm sure. If you can my cell is (919) 741-7696. Just send me a text or something.

Mehdy, I can't tell you how glad I am that you contacted me. It says a lot about your character, your ability to think deeply about things that are important in your life, and your good heart.

* * * * *
We never had the chance to get together before I left for my summer placement, so I will never get the chance to see what that conversation would have looked like. During the past few days, I have found myself reading this message over and over again, wondering what the purpose of it all was, mourning the fact that we never had the opportunity that we deserved to learn more deeply from one another. Which is hard. However, I am left with the hope that, if people would only learn from Mehdy’s example, insha’Allah, we’d be on our way to a more equal and more loving world.
Posted by Jacob at 4:18 PM