Every week, we collect anonymous entries sent in using the link on our sidebar and post them all on Monday. We post anything as long as it doesn't contain personal attacks, hate speech, or express or insinuate that one is at risk for hurting themselves or someone else. Please read this for an explanation of this policy and seek help if your or a friend find yourself in that position. With those exceptions aside, please feel free to submit your thoughts and questions. :)

NEW YORK PASSED GAY MARRIAGE. Yesterday was NYC Pride [Hi, BDUers who are all playing together in NY! I'm fomo-ing :( ] But what I'm trying to say is: THANK YOU, NEW YORK!

Since last week, my first set of campers arrived and today I'm taking seven of them on a five day kayaking trip today! Woot.

Also in the last week: Frida Kahlo made an appearance on the blog, WOMYN Magazine is still taking submissions (I'm working on mine! Are you working on yours?!), and the nature vs. nurture debate returned for a round two .

The Women's World Cup kicked off (pun!) yesterday, and features at least one openly out player in Megan Rapinoe (who I met two summers ago!!! picture below). Rapinoe used to play for the Chicago Red Stars of the Women's Professional Soccer League and was happy to be one of the favorites among the lesbian community. She told a reporter for the Windy City Media Group (and Chicago LGBTQ publication) that "I want to make people feel like, when they go watch [ the ] team, that there is someone that there's someone like them on the team, and that we're not all the same on the team, that there is diversity. I think that's a good thing for the sport and our team in general." 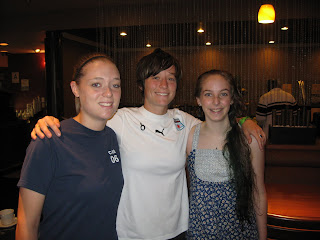 #1
has anyone watched this yet? it's the music video for make it stop (september's children) by rise against. and on another note, SO proud to be a new yorker.
Posted by risa at 12:30 AM