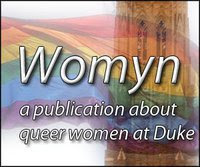 Happy Wednesday, y’all! Just to remind you, submissions to WOMYN’s second issue are due September 16, 2011! We’re super-excited about this issue – it’s going to be so awesome, because all of you are awesome, and so are your submissions (without your voices, WOMYN’s awesomeness quotient is going to suffer, though. Just sayin’.) So please send your poetry, prose, cartoons, photographs, etc. to womynatduke@gmail.com!!! And now, it’s time for the first WOMYN Wednesday Poll of the summer:

Do you feel comfortable coming to the LGBT Center?

Although this question isn’t directed specifically or exclusively to queer women, it’s an important question to ask, because it applies to everyone, queer or not.

There’s been a lot of discussion this past year, both on and off the BDU Blog, about the LGBT Center at Duke. In fact, at times this discussion has approached argument status, mostly due to the apparently polarizing nature of this space on campus. (Disclaimer: the following is based on what the writer, Jennifer, has seen/heard, and should not be taken as a reflection of anyone else’s experience or opinion.)

The Duke LGBT community is made up of many different kinds of people – some are very active, out, and open, while others are not. Many of the most out and open members are often the most vocal and visible LGBT people to the rest of the Duke community. (And let’s not forget the awesome allies who stand beside us – they’re one of the As in LGBTQQIAA, and their support and advocacy makes a positive impact every day.) A significant number of these members of the LGBT community tend to hang out in the Center on a regular basis, whether it’s for Fab Friday, for one of the several discussion groups hosted by the Center, or just to do homework, surf the web, and chat with friends. These people are sometimes referred to as “The Community” or “The Center Gays,” usually in a negative context.

There are other LGBT people here at Duke who do not regularly come to the Center. That’s fine – that’s awesome, in fact. Coming to the Center is not a requirement, and far be it from anyone to force others to go anywhere against their will. Sometimes the Center seems downright scary, especially for those who are questioning, closeted, or new to Duke. Some might see the Center as superfluous or confining.

The fact that there is such a division (these two groups are broad generalizations) within Duke’s LGBT community is not bad, nor is it unexpected. But sometimes we seem a mere hop, skip, and jump away from a really hurtful conflict, which is bad. A blog post addressing this issue happened earlier this year, as did some discussions in comments on the blog. There was even a meeting about it. However, after some comments on the Anonymous Posts this week, it appears that we haven’t yet resolved the discussion. So, please take the survey – your responses will be a helpful addition to the discussion. (Do avoid any obviously inflammatory language in your comments, both on this post and within the survey – the survey is not meant to start an argument. On the contrary, we want a constructive conversation, so that there will be no need to discuss this issue further. )