Let's See Where This Goes 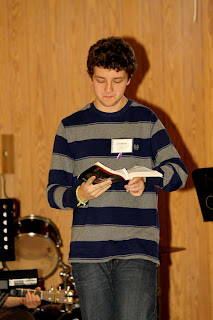 So earlier this month in a radio interview, Rick Santorum was asked whether he considered gay and lesbian couples with children a family. His response, rather surprisingly, was "Yes, of course it's a family." (You can watch the full interview here). I have no idea what this means for American politics.

Though Santorum is still far from the most progressive presidential candidate, he has apparently had quite a come-to-Jesus moment recently. Will this new position have any effect on his other political opinions? Will this bold move change the conservative political landscape? Was it just a political farce in an attempt to gain more centrist primary votes? I have no idea. What I do know is that this affirming comment, coming from one of the most vehement opponents of lgbt citizens, offers a glimmer of hope to the lgbt community that even the most conservative politicians might soon be changing their views.

It's still too early to tell whether or not this is the start of a radical change of opinion by Santorum or if it will affect the rest of conservative politics, but this was definitely out of character for Santorum. I am very interested to see how this comment will shape the rest of the conservative nomination. Let's see where this goes.
Posted by Jonathan at 8:00 AM