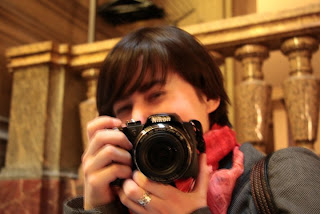 [Editor's Note: Don't forget! There is a blog meeting tonight at 9:30pm in the Few FF first floor common room! We'll have cookies :)]

Hello, everyone - it's been a while since I've posted, which is awesome. It means that the Blog has a healthy crop of writers with important points of view and experiences to share. I've not done anything super-interesting in the LGBTQ world lately, mostly because I've been focused on some other things.
For example, some of you know that I got an offer of admission from UW-Madison's French PhD program at the end of January. I hope this will be the first of several offers, but let me tell you, I'm so excited about the program. It pretty much has everything I want - excellent scholars, a focus on interdisciplinary studies, a strong teaching program, and an awesome music school/local music scene. Wisconsin also legalized domestic partnerships, which means that LGBTQ couples could get some (not even close to all, but it's a start) of the protections and benefits available to straight, married couples. I could feel safe and accepted there, and that is hugely important to me. Because, y'all, I get tired of fighting and arguing and asserting that yes, LGBTQ people deserve the same rights as everyone else. I also sometimes get tired of the infighting that happens within Duke's LGBTQ community (and the greater community as well) - some people aren't as activist-oriented, or even out; some are out, proud, and raring to go, and sometimes it feels like these two general groups just can't say anything nice about each other. I love all of y'all because you're such great individuals, and you make up a community (whether you're out or not, involved or not) that seriously can't be beat. But sometimes I just get psychologically and mentally and socially exhausted, and I don't think I'm alone.
Another thing that's happened recently is that I broke my foot.* It's not an interesting story, I swear, but it is my first broken bone, so I'll tell it anyway. I was walking, and I fell. Duke EMS, Student Health, and Duke Urgent Care all originally thought it was a sprain, so from last Wednesday to last Friday afternoon, I was walking on it, albeit gingerly. The doctor called Friday afternoon to say it was actually broken, so I spent the weekend in a splint with strict orders to avoid putting any weight on the foot. I finally got a cast yesterday morning (it's kind of awesome - you should sign it), and I'll be in it (and on crutches) for 4 more weeks. This injury has made me hyper-aware of just how much I'm used to doing for myself. Suddenly I can't carry anything in my hands, or open doors, or move quickly. I get random cramps in my hands, arms, and shoulders, so I have to stop multiple times on my way to class or back to my room. Stairs are hard to navigate, and they're everywhere - I live on the second floor, and there's no elevator in my dorm. I'm physically tired all the time. I've had to ask for a lot of help from my friends and my girlfriend, who has been taking care of me since Friday. I hate asking for help. But the more I try to do on my own right now, the harder everything becomes. So this is a learning experience - it's made it clear to me that I can only do so much by myself, and that sometimes it is okay to stop, or go more slowly, or ask for help.
I don't really have a pithy message, other than to remember that sometimes people get tired, for various reasons. And sometimes you have to accept it and respect it.
*Just to be clear, I recognize that I'm coming from the point of view of extreme privilege. My intent is not to whine, or to compare my experience with anyone whose everyday challenges are greater than my temporary injury. Like I said, it's a learning experience for me, because some of those challenges have become mine, and I've gotten a glimpse of how much harder my life could be.
Posted by Jennifer at 8:00 AM