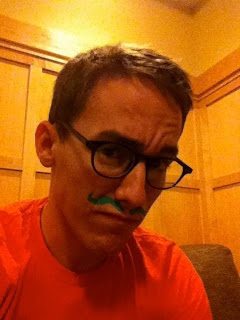 I feel there’s some unspoken understanding on this blog that at least one post has to chronicle the writer’s first major coming to terms with self and sexuality. Such a post can feature some fraught coming-out narrative, or it can be entirely reflective and conceptual. What really matters, though, is that *I* haven’t done one. So, since this is still only my third post, I figured I should get the old self-discovery spiel out of the way way so I can back to writing about more fun things like sex and art.

I’m from the South. And we’re not talking Triangle-South, or Miami-South, or Maryland-South. We’re talking middle-of-the-country, median-income-of-less-than-half-national-average, more-Baptist-churches-than-private-businesses-South. Don’t get the wrong idea from how I describe it: all these things still made for a great place to grow up. But it did also mean that during my formative years, I had no idea what a gay person was, more-the-less what kind of lives they led. I didn’t learn the word “gay” until I was eight. The only gays in the media I saw were on Will & Grace, which was generally considered too racy for me at the time. Any queer adults who found themselves living in Williamston, SC apparently had the good sense to leave, because I’ve not seen hide nor hair of them in a whole lifetime living there.

The only evidence I had that queer adults even existed in the real world was through my mother. Throughout most of my childhood, my mother was a full-time homemaker. This meant that I was told enough stories from her life that I could probably write a competent biography by the time I was ten. In her stories, there was precisely one gay character, a co-worker in a department store when my mother was in her early thirties. Now, my parents are both liberal (much more so than myself), and my mother always made it clear that she thought LGBT Americans deserved the same rights and respect as others. But she also made it clear that she thought this man was a despicable little shit. It wasn’t that he playfully flirted with male customers. It wasn’t that he talked explicitly about sex. It wasn’t that he bought drinks for boys when they all went out to the bar after work. It was that he had a wife and children. According to my mother, he didn’t know he was gay until after he was married. But, for my mother that didn’t redeem him in the slightest. All she saw was a man who made someone he cared about suffer every day of her life because of his own lack of honesty and inability to understand his own sexuality. Nothing could be worse than to hurt a women through one’s own ignorance and weakness.

Naturally, Gnothi Seauton became a sort of cardinal queer virtue for me. So, years later as a high-school sophomore, I found myself in a difficult place. Sparing the details, I found myself at a breaking point in sexual tension with a friend. She wanted to get busy. I had secretly liked her since we met. I thought she was hot. But, at the same time, I had also been catching myself staring at boys for the last year or two and had a crush on a senior guy in my drama class. So, when she pressed the issue, I did what seemed like the best idea at the time: I blurted “waitnostopIcan’tI’mgay.” I wasn’t about to let myself become the guy who realize that he was only attracted to men after he was already knee-deep in children.

For most people, I came out as liking men years before I came out as also liking women. I didn’t take a girl out on a date until I was twenty. Naturally, this adds its own whole set of challenges, which are generally unique and absurd enough that I can’t find anyone capable of giving knowing advice. Girls at parties who might have seen me with my ex or hanging around the Center have me friend-zoned before we’ve even met. Having grown into both an adult and feminist before ever being intimate with a woman means I am absolutely terrified of being romantically or sexually assertive. I can’t navigate hetero-hookup culture to save my life (ask me how many strangers I’ve danced with at Shooters. Or don’t, because its zero). I’m getting better in most of these areas (except probably the dancing), I still have a ways to go. But that’s not important. What’s important is that now that I’ve written my requisite exposition and character development, I can promise you all that the next blog post with be full of excitement and action.