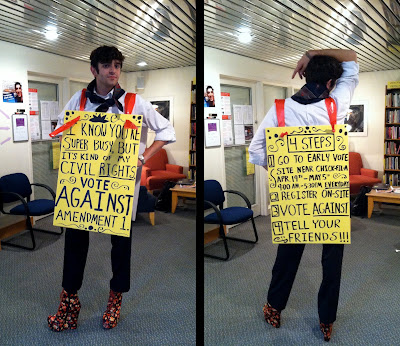 I have to admit it. As the vote on Amendment One draws near, I’m scared. And not just horror movie scared—no, I’m scared in an existential way that shakes you to your core. It may seem obvious to some, but let me explain why I’m scared.
You see, I consider myself a strong person, and yet these past few months, I’ve started to feel very weak. While weakness isn’t new to me, I haven’t felt this weak in quite some time. In many ways, I’ve spent my life learning to be strong, learning to overcome, and learning to take pride in my identity. Through persistent effort, I’ve been able to make weakness something that is constantly in my past—at least until now.
I remember feeling weak as a child, when the other kids in my neighborhood made fun of me for playing with Barbies and for wanting an easy bake oven. I used to sit in the dining room of my house and watch the other kids in my neighborhood play on the street, but because I was a “sissy,” and a “girly-boy,” I didn’t go outside—I stayed at the window, wishing that I had friends in my neighborhood who could play dress-up with me, who could be my friends even though I was a little bit different. I remember feeling weak then, but I mustered up my strength, learned to assert myself, and eventually found a way to make friends in spite of being different.
I remember feeling weak in middle school whenever my friends asked me if I had a crush on someone. I dreaded that question, because every time someone asked me, I longed to tell them the truth and never did. Thoughts of a boy in my class would bubble up warmly into my mind, but each time I pushed them back down in favor of a lie. I lied so often. I remember feeling weak then. Over the years and after many failures, I gained the courage to stop lying, to claim my truth. Through strength, I was able to live a more honest life.
I remember feeling weak in high school, when I heard about Lawrence King, an eighth-grader who was murdered by one of his classmates because he was gay. It wasn’t until I heard about Lawrence’s death that I began to understand the full magnitude of homophobia, and it was crushing. I realized that I lived in a world where even children thought it acceptable to kill someone for being different. I remember feeling weak then, but I didn’t take weakness for an answer—I found the strength to make an announcement over my high school intercom decrying Lawrence’s murder, I found the strength to begin organizing local gay straight alliances in Raleigh, and I found the strength to author and pass a resolution against LGBT bullying at the Annual Conference of the NC Methodist Church.
And I remember feeling weak last semester, when the NC General Assembly approved a referendum on Amendment One, placing my civil rights to a majority vote. I sat, dazed, surrounded by the realization that something like this could happen in my home state. But once again, I summoned all of my strength and got moving. Along with a few cherished friends, I worked to establish a campus-wide coalition against Amendment One, to hold a rally, to secure a voting site on campus, to author a Duke Student Government resolution against Amendment One that passed unanimously, and to get grants for printing up t-shirts, buttons and stickers.
But over the past few days, I began to realize something.
I realized that, no matter what I do, I could never be strong enough. Through individual strength and perseverance, I will never be able to defeat one of the most hateful pieces of legislation in our state’s history. My personal strength—no matter how fervent, no matter how fierce—will never be able to overcome amendment one, because at the end of the day, I am still just one person with one vote. In the face of Amendment One, I am profoundly weak. For the first time in my life, I feel powerless.
Which is why I need you.
While I may be weak as an individual, with you, I can be strong again. Because of you and through your ardent support, I will be able to find my strength. Alone, I may be only one person with one vote, but together, we are two people with two votes, and as a community, we are hundreds and thousands of people with the strength to change this world.
So I need you to be strong. I need you to be strong for my family. I need you to be strong for my community. Alone, I can never achieve equality before the law, but together, we just may stand a fighting chance. Together, against all odds, we may just be able to beat Amendment One. If we stand up, arm in arm and hand in hand, we have the chance to make history by being the first state in the South to vote down an amendment that takes away the fundamental rights of the LGBT community.
Together we are strong. Together we make history.
Will you be strong with me?
Posted by Jacob at 8:00 AM