Disclaimer: This is not a criticism of the Trevor Project and its message. It’s a commentary on the colloquialism of its motto and it’s application to life; specifically, college life.
It gets better. For some. And by some, I mean about 20% of the population. And the chances of it just “getting better” wholly rely on how tormented and tortured you previously were. The worse your life is, the easier it is for it to just “get better” (which isn't always guaranteed). What I mean to say is if your life was super-fantastic-rainbow-glitter-awesomeness, then chances are it's going to be pretty difficult for it to get much better than that. And for relativity’s sake, let’s just say the before and after are high school and college, respectively.
If you were bullied, there are high chances that it’ll just “get better” because proper adults have better things to do than physically and mentally harm others. This is not to say that there aren’t people out there who can’t shed their immature ways and just leave others be. I mean, we see bullying in our government all the time, and homophobic language has become an unfortunate standard in everyday conversation.
If you come from a small, conservative town, and end up at an institution of high learning, chances are the liberal feel of your new environment is certainly better than the suffocating feel of your previous environment (and depending on where you come from, even religious universities can be a safe haven for you). And if you were struggling with reconciling your religion with your LGBTQ identity, there will most likely be more support and solidarity within your newfound community.
But for those who haven’t been bullied, or morally conflicted, or come from a place that is accepting—those who were still discontent with their previous situation because it was just “ok” and not “good or great”, I’d say you’re out of luck.
Well, you’re only out of luck if you limit yourself to the mantra of the Trevor Project. I hate to break it to you, but the Trevor Project isn’t targeting you as its audience. Ok, so you say that’s unfair, and that you want better than “content”—you want happiness too. What are you supposed to do, right?
Well, that’s an easy answer, but it’s not an answer that’s easy to execute.
For you, things won’t just “get better”. You have to make them better.
I identify with the my-life-wasn’t-bad-but-it-wasn’t-great-either crowd. I’ve apparently lived in a progressive city all my life (without knowing it was progressive) but my actions have made my life as a queer woman manageable. I never came out in high school. The reasons for that were simple:
A) I went to school with my sister for a short while, and didn’t want my family to know.
B) I went to school with my sister’s friends for a short while, and didn’t want them mentioning it to her and letting my family know.
C) Queer women didn’t exist unless they were sassy and likeable enough to demand respect from others/had friends that would have their backs if anything were to happen (read: they were the popular basketball girls or the girls who were in gangs—yes, REAL gangs). I was unfortunately neither of those kinds of girls. I should’ve joined a gang when I had the chance, am I right?
D) I was afraid of judgment.
Funnily, my closeted life in high school was, in ways, “better” than my out life in college. Which is kind of a bad thing. But speaking in terms of comfort with my identity, my before was certainly not better than my after. And I’m now going to explain how I made my “after” better.
I came out first thing. It started with coming out to my first year roommate during our summer Facebook message exchange, who responded with, “Well it was certainly unexpected, and I kind of wish you made it more dramatic than a Facebook message spoiler, but I’ll live.” After that I was just honest and open about my sexuality. There are pros and cons to coming out, and depending on what you want to achieve by coming out, you may or may not find it useful.
If you’re coming out to finally explore your sexuality, then I suppose that’s a good idea. It’ll be hard to find other LGBTQ identified students to forge relationships with (please note how I’m not saying it’s impossible, but the math deities say probability is on your side if you do come out). There’s also the Duke hook-up culture component to consider as well—that culture includes all sexualities. Whether or not you want to become a part of that could possibly influence your experiences.
Oddly enough, coming out might not help in your endeavor of dating at all. In my experience, that was the case. I had more "queer relationships" when I was closeted than since I’ve been out, and I often wonder if there was even a point to me coming out, besides slightly alienating myself from my family. But to counter those feelings are all of the wonderful experiences I’ve had with the people I’ve met and how comfortable I’ve become with my sexuality. However, if you’re looking for comfort, it’s not enough to just come out. You have to establish a sense of belonging, or you’ll be unsure and alone. Which, in my opinion, is worse than being closeted and alone.
I was (almost) doing the most last year. I attended a number of events sponsored by BDU and/or hosted at the Center. I became an active member of the Community and started writing for the blog. And by doing so I have gained a few new friends. Please note that these friends and experiences didn’t just fall into my lap out of nowhere. I had to put forth some effort. And I’m pretty happy that I did. 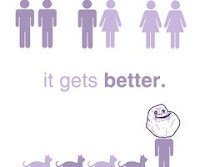 To make a long story short, for those who don’t see it just getting better, be proactive and make it better for yourself. I don't believe "it gets better", but I'll be damned if I sit around and do nothing about my state of content. If it still doesn’t get better after that, you’ll just have to continue what you’re doing and wait—which is much better than sour-graping and doing nothing but expecting better. If it comes to the worst, you can always just start collecting cats. Focus on the good things in life and do what is in your power to shape your future.
Also, never consider joining a gang. That’s just a very bad idea in general.
Posted by "Ebony Way" at 8:00 AM