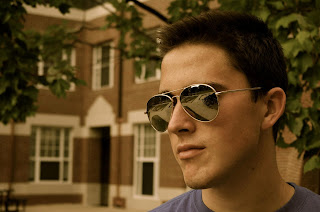 Recently, some friends and I played a game after an evening out. The game – to sit in a chair in the middle of the room and name the person in the room that we would most like to see naked. Wow. It was awkward to say the least. The company that evening included several close friends, a few ‘good’ friends, and then some general friends. I’m fairly certain that everyone in the room knows that I’m gay, but still when it came my turn I had an extremely awkward moment. I sat there thinking, thinking about how uncomfortable it would be to call out the name of a straight male in the room - uncomfortable for me, uncomfortable for him, uncomfortable for the entire room. So I shrugged and named a female.
The fact that I wasn’t able (or willing) to express my true feelings in front of a group that I consider to hold of my closest friends really made me think about some things. I was really disappointed afterwards, but I’m not sure if I was disappointed in myself or in my friends for playing the game in the first place. The game was a bit vulgar, but maybe it is my fault; maybe I should have been comfortable enough with my identity to say a man’s name. On the other hand, maybe I am underestimating my friends; if so, I feel bad for not trusting them. I guess even though I’m mostly comfortable with people knowing that I’m gay, it is a completely different story when I’m forced to admit things in a public setting like that.

We all know that rejection really sucks, especially by close friends, but don’t do what I did. Don’t sell yourself short, and, more importantly, don’t sell your friendships short by not trusting your friends to be supportive. No, I don’t suggest you tell straight boys you want to see them naked, but maybe, just maybe, trusting yourself to trust others would leave you better off. Shakespeare once said, 'Expectation is the root of all heartache." Whatever you do, don't expect the worst, especially from your friends. I expected my friends to react negatively if I told the truth, but I now know I wish I had said something else that evening, I don’t know what, but something else. I don’t know about anyone else, but I’m a bit tired of playing along.