Faith, Firsts, and the Quiet Motions of the Holy Ghost 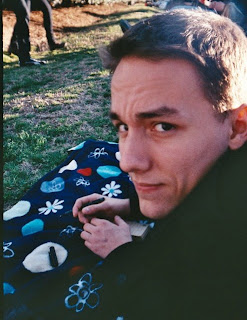 Today, I can only remember a handful of the details from my first sexual experience. I remember, for example, saying “no.” I remember a hand put over my mouth after I yelped in pain. I remember how my first kiss involved teeth, breath, and my ear while my head was held down. I remember shaking a great deal. Fifteen minutes, tops. Eyes down, wash hands. Apologize for something, stutter. Run.

Now, I’m not telling this story to get it out of my system, or to one-up someone in the arms race of oppression, or to raise awareness about sexual assault. The women down at the Develle Dish are already working fairly hard at an awareness campaign, and I recognize that my male privilege might be one of the only reasons I can write this post with my name attached. See, believe it or not, I’m not here to talk about sexual assault: I’m here to talk about religion.

I get questions about my faith a lot. This is probably because it baffles people. Queer folk of faith are uncommon enough, but converting after coming out is practically unheard of. I grew up as a hard-line atheist in a town so pious that even some of my teachers harassed me for my beliefs. Like many artsy, nerdy kids in the early teens, I started studying and loosely identifying as Buddhist. If that’s not enough, I’m crass. I’m debaucherous. I’m cynical. I’m occasionally blasphemous. Yet, during the Easter Vigil at the chapel my freshman year, I still stood up in front of everyone and, wearing a suit and baptismal robes, I officially converted to Catholicism.

When people ask me what caused me to convert, there’s a handful of lines I tend to feed them. Sometimes I’ll contrast it with other religions (notably Buddhism) as one of the few that explicitly celebrates life and humanity. Other days, I might talk about the beauty in the notion that an unwed teen mother was the only human born without sin. If I’m talking with a friend who knows that I have difficulty swallowing the supernatural, I talk about the value in identifying with a cultural and moral superstructure. I make it all sound very academic.

In addition to being cynical, crass, and debaucherous, though, I’m also a liar. I know the exact moment and reason I became religious. As you might expect, this brings us back to our story. I was assaulted on a weekday around lunch time. I still had to get through the rest of the afternoon as if nothing was wrong. I wore my hoodie slung low over my eyes. I avoided making any eye contact or walking near anyone. Part of this was to avoid having to talk. More than that, though, I felt somehow certain that if I got close enough to anyone they would surely smell something wrong with me. If dogs can smell fear, it seemed to make sense that students could smell shame. Or maybe smell sweat on my clothes, see dried spit on my face. Maybe smell another body. The blood.

Eventually, sulking and sagging, I made it back to my room. I docked my iPhone, turned on some music, and sank into a puddle leaning against my bed. Even today, I admit that I rarely ever pray, and when I do, only in celebration. I pray in museums, or during the sprint at the last leg of a run, or when I find someone beautiful and naked sleeping next to me. Before this day, though, I never bowed my head or bent my knee. If I wanted to talk, I talked to a human being. If I needed help, I asked it from someone with a physical body. But at the moment I didn’t have anyone I wanted to talk to, and there wasn’t much any human being could do to help.

So I prayed. It wasn’t as eloquent as Christ on the Mount, or as beautiful as the song from within Nebuchadnezzar’s furnace, but I imagine it was at least sincere. I asked to no longer be attracted to men. I asked to forget. I probably asked to die. None of my prayers were answered. But, like any good student in the South, I had read a lot of Flannery O’Connor: I knew what it was supposed to feel like when the eye of God was staring directly at you. For the first time since lunch, I stopped shaking. My mind was still racing and raving, yet my body slowed and matched itself to a different heartbeat. Even today, I will swear that I felt the breath of the Spirit against my neck. So, at 4:00 p.m., I climbed into my bed. I cried a moment and fell asleep. I did not dream. I woke the next morning.

It was a small miracle, granted. My life wasn’t any less miserable. It didn’t heal any trauma or keep me from fearing sex for over a year. But, I lived. A few months later, I started attending church on my own. It confused people. My mother made sure to remind me that the Vatican wasn’t historically fond of queer men, but otherwise people kept their opinions to themselves. Eventually, during my initiation years later, I had to speak with a priest concerning my faith and motivations to join the Church. I don’t fully remember the conversation, but I know I struggled with the point. I couldn’t figure out how to explain that I still had too much doubt in salvation for it to be a purely selfish venture for me. I couldn’t figure out how to explain the words “He was a good listener one day--I owe Him one.”