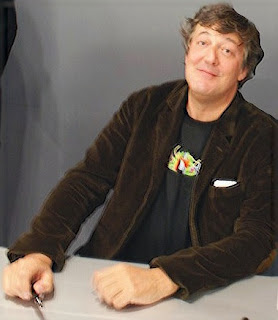 So I’m going to take some inspiration from another blogger who recently wrote a post on a queer role model. Introducing the British National Treasure, Stephen Fry. (For the record, they actually do call him that). Stephen is well known in the UK and around the world for his masterful wit and for his talents across a great many fields. He also has quite the interesting story in his background. He came from a well off family, and went to two preparatory schools, both of which he was kicked out of. Despite this, he was well known for his far above average intellect in both of these schools, and was eventually arrested for stealing a credit card from a family friend. After serving three months in prison, he went to City College Norwhich. While there he took the Cambridge entrance exams, and got a scholarship due to his high marks. Cambridge is where his career truly started.

While at Cambridge he joined the Cambridge Footlights, a comedy organization which has produced many of the well-known British comics. (Some of these being Graham Chapman, John Cleese, David Mitchell, and Robert Webb, to name a few) Cambridge Footlights was where he met his future comedy partner, Hugh Laurie. You may know him from “House”. Well, they went on to make a TV show called “A Bit of Fry and Laurie”. The show was a sketch show that aired in the ‘80s on which Laurie frequently played an idiot and Fry a more academic man with horrible taste in ties. The show was well received and Fry has since gone on to do a great many things. I can’t list all of the things he has been a part of here, but he has been in many comedy shows, stage dramas, made documentaries, made radio programs, written plays, been in movies, written novels, hosted TV shows, and more. He is a very busy man.

I suppose what I like most about him is that he’s witty, charming, and is a very inspiring role model to look up to from a queer perspective. He is one of the most popular celebrities in Britain, and he is openly gay. Not just that, but he strikes a very unique balance with talking about it. He doesn’t avoid the topic, but it just doesn’t seem like a very big deal. More than that, people who would normally be perfectly fine with saying homophobic things won’t do it around him. In fact, they become remarkably affirming around him. He is simply a very good influence and I highly recommend you look up some of his work. Any kind will do.

Bye now. (Oh and the one on the right is Hugh Laurie) 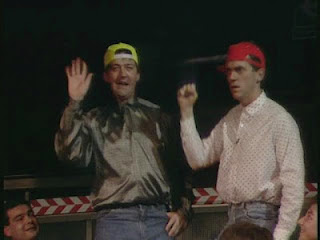