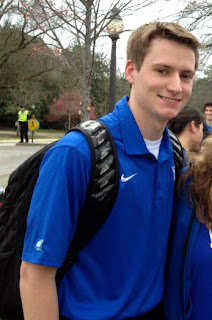 As anonymous post #3 from yesterday pointed out, the NHL joined the fight this past weekend to end homophobia in sports. The “You Can Play” campaign launched its first public service announcement during NHL games this past weekend. The campaign was established by Brian Burke (Toronto’s GM) and Patrick Burke (his son and scout for Philly) in an effort to continue the work of their son and openly gay brother, Brendan, who was killed in a car accident two years ago. The first ad features eight current NHL players and apparently over thirty NHL players have signed on to work with the project. Def worth a minute of your time to check it out.

As I was checking up on other efforts to combat homophobia in hockey and sports (because that is how everyone spends their spring break), I encountered a pretty inspiring and cool story of a high school hockey player coming out to his family, teammates, and classmates.
the link has been taken down because the player was a minor, but all over the interwebs you can find stories of younger athletes coming out and being accepted by their peers.

Anytime you can place the weight of Henrik Lundqvist and Daniel Alfredsson behind a cause, you can deliver a powerful message. Everyone always complains how homophobia can only be wiped out if an all star comes out and can be more or less a poster child. However, maybe attitudes are changing enough that instead of waiting for current athletes to come out, a generation of already out athletes will come on to the scene. This perspective enables us to be active agents for change to make schools more accepting places, rather than sitting around and waiting for others to lead the way.
Posted by John M. at 3:21 AM