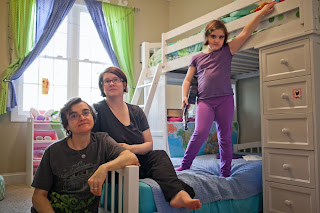 Our seven-year-old has started second grade and that means it’s fractions time in the James household. At the dinner table the other night, Sophie walked us through her budding understanding of “equal” and “equivalent.”

“Did you know that 1/2 and 3/6 are equivalent?” she offered in her best “teaching my parents” voice.
“What does “equivalent” mean?” we queried.

A pause. Finally she says, “When things are the same but different.”

(I’m positive someone with greater fluency in the nuances of mathematics could completely unravel the metaphoric thread I’m weaving but bear with me.)

Last spring, the battle over North Carolina’s Amendment 1 produced a diverse, committed coalition of forces unified against enshrining relationship discrimination (of both homosexual and unmarried heterosexual couples) into the state constitution. There were a host of specious arguments offered by supporters of this ultimately successful legislation. Ron Baity, founding pastor of Winston-Salem’s Berean Baptist Church and the head of Return America, promoted one line of though that sticks with me.

In February 2012, Baity addressed a gathering of religious leaders at a Day’s Inn in Southern Pines about the urgent need to pass this amendment “protecting traditional marriage.” Baity’s homophobic sermons are legendary, but that’s not the part of his 40-minute speech I remember from watching it on YouTube a week later. What struck me were his references to “studies” from the Netherlands, the first country to legalize same-sex marriage in 2001. The data show, insisted Baity, that even when given access to marriage, “the homosexual” does not avail him or herself of the right. “96% of [Dutch] homosexuals and lesbians,” he asserted, “remain unmarried.”

Baity went on to claim that a “Dutch poll” found that even those who are married “will have a sexual relationship with at least eight other homosexuals every twelve months.” In Massachusetts where same-sex marriage has been legal since 2005, there are “stats,” Baity pronounced, showing that in the first three years over 6000 gay and lesbian couples got married. Since 2008, however, same-sex marriages across MA townships are “in the single digits.” Why the drop off? He offered this explanation:

“The homosexual community wants their false marriages to be accepted in this country like traditional Biblical marriage. It’s a social issue with them. They just want the status. They don’t care about the marriage. […] They just want the status of saying, ‘Our marriage is just as important as traditional marriage. [Statistics show] we’re not going through the process. We’re already enjoying our lifestyle. We just want [what the] status quo [has]’.”

For Baity, such evidence illustrates that LGBTQ individuals want the rights that come with marriage but are unwilling to accept the commitments that marriage requires. I have not been able to uncover what credible study actually says what Baity claims. He might have been referencing the work of M.V. Lee Badgett of the Williams Institute on Sexual Orientation Law & Public Policy at the UCLA School of Law. Badgett wrote a book that analyzed the impact of same-sex marriage legalization in the Netherlands. In a 2009 New York Times interview she noted that while the image of marriage for straight couples – its emotional and spiritual commitment to another person – changed little since same-sex marriage was approved, the impact of having a socially legible relationship on how gays and lesbians are seen and see themselves is palpable. Even if like heterosexual men and women they choose not to avail themselves of that right. Badgett writes,

“Only marriage has the social understanding to back up the legal status, and the social meaning is as important as the legal rights.”

Badgett’s study shows that despite the calamity predicted by supporters of Amendment 1 in NC (and those backing similar legislation on Minnesota ballots this November) marriage is not changed by allowing gays and lesbians to have that right; it’s the idea of equality that changes.

So Pastor Baity is partially correct.

I don’t think I’m going out on a limb to argue that LGBTQ citizens who want to marry want that right because it is the status quo. It is the legal path to the same privileges enjoyed by other married American citizens like health insurance, inheritance, social security benefits, even pathways to citizenship itself.
Marriage is also the gateway to being seen as equal. By having the same privileges, queer folk become legible in ways that have ramifications beyond marriage. This is the real threat for Baity, one he tries to dismiss by implying gay people are biologically incapable of monogamy and therefore of ever really respecting or embracing marriage the way straight couples do. (I’ll leave divorce statistics unspoken. You can look those up yourselves.)

And here is where my daughter’s fractions lesson comes back into focus. In very real ways, equivalent rights are unacceptable. Many who opposed Amendment 1 did so because they saw the measure as an affront to equality. But there is a risk to pursuing marriage rights above more broadly conceived measures, like employment non-discrimination, universal healthcare, and immigration reform. While these initiatives might seem focused on equivalencies – domains outside of marriage where certain rights could be accessed – their potential impact is vast, especially for people who do not wish to marry. As marriage becomes the gold standard of LGBTQ equality, we would be wise to remember the many activists (past, present, and future) who argue for queerness as a challenge to traditional institutions, like marriage, that tend to fix and naturalize ideas about gender and sexuality.

As I celebrate NC PRIDE this weekend and consider the post-Amendment 1 political landscape, these are the questions at the forefront of my mind. If equality is only accessible through erasure of differences be it regarding marriage, monogamy, dress, or desire is it really equality? How can we strengthen and expand our coalitions of supporters beyond the question of marriage? Should we make a political and cultural space for equivalence? How do we fight for equal rights while also fighting for the right to be different?
Posted by Kyle at 8:00 AM