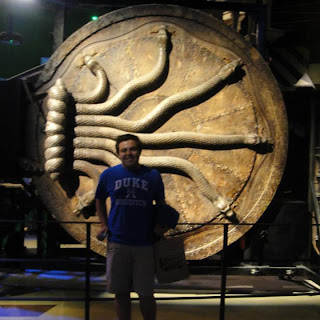 When it comes to nucleotides and amino acids, evolutionary processes have led us to four bases and twenty amino acids that are utilized in our everyday biological chemistry. Even better, this is also universal: with very few exceptions, all organisms across all domains of life use these same nucleotides and amino acids to form DNA and proteins that guide our functions. The chemistry of amino acids and nucleotides aren't too complicated (although if you're in Bio201, biochem, or anything of the sort you might disagree with me); with some minor tweaks and substitutions, it is simple to construct new nucleobases and synthetic amino acids that, while novel, are unnatural, and do not conform to the central dogma of molecular biology.

I arrived to campus two years ago, and I felt like an unnatural amino acid: out of place, weird, and synthetic. I was putting on a face that was going to get me through college. I had to pretend to be "natural." Straying away from the chemistry, I was shy and unsure of what college was about to throw at me. My introversion kept me indoors, avoiding parties, and wondering about what I was missing. I wanted to incorporate myself into the Duke mainstream, but every time I tried for the first month, I felt rejected. Coming from high school where I was well liked, college was a different feeling as I searched for acceptance. No matter how much I attempted to conform to the Duke "culture," even the "culture" within the LGBTQ community, I felt unnatural.

Synthetic amino acids are peculiar because when substituted for a natural amino acid in proteins, they can shut down the protein's function and destroy the native structure. In addition, synthetic nucleotides can incorporate mutations into DNA if included in DNA synthesis and replication. Well, this is exactly how I felt coming in to Duke. Even if I wanted to fit into the community, I wouldn't contribute anything, or I would screw something up, both personally and communally. What did I know about LGBTQ activism? I had only been out for five months. What meaningful relationships could I form? I'm too awkward to interact with people, and how would I even be remembered? Me, the unnatural amino acid, wouldn't survive selective pressures and I would get flushed out as unimportant or extraneous.

Yet here I am, two years later, still writing for this fantastic blog that has been such an important part of my Duke career and my stable integration into the LGBTQ community. Remember how I said unnatural amino acids and nucleotides are, well..."unnatural"? How I said that they can stop a protein from functioning or mutate DNA? Well, these are true statements, in some regards. However, unnatural amino acids have been show to improve immunogenic response to self proteins that are involved in autoimmune disorders and could stop inflammation and toxic shock response. Unnatural nucleotides are used in a specific assay to detect very small amounts of viral DNA to see if HIV or HCV is dormant, on the rise, or eliminated. And the utility of these two synthetic biology tools is only increasing, not only for medical advances, but also to improve basic sciences research and develop a better understanding of ourselves and the origins of life.

I realized that being "unnatural" did not mean that I had no role in this community. In fact, as I cited at the beginning, being novel may mean the same as unnatural, but my novelty provided something new to the university and this blog (I mean, who else has a post centered around synthetic biology?). I had to find my niche, and it wasn't the easiest task, but I did find my way. Particularly, writing for this blog has been my way of reaching out to Duke in ways that I can't do by being an engineer, or by being a researcher, and especially by being an introvert. Being a novel, "unnatural," and unique amino acid or nucleotide may just be the tool this community needs to thrive and survive. There is no Duke or LGBTQ "culture" that is supplemented by a few nutrients. The LGBTQ community does not fit one mold, nor four, nor even twenty molds, and conforming to one of these set structures isn't going to advance us. As we welcome a new class of students to Duke, each person needs to appreciate their differences and embrace how we can come together and build a stable community. We need more unnaturalness to progress, so that the DNA strand can hold new structures, and so the peptide chain folds in new ways and confers new functions.

Hopefully I didn't go too crazy with this extended metaphor, but I'm always available to talk (especially if it's on the synthetic biology) via email. To the new class, welcome to Duke, and to the old, welcome back!