The closet seems smaller this time... 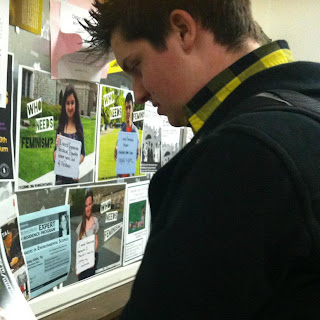 After a slow section over summer vacation, Our Lives is ready to get back in gear for this semester. If you're new to Our Lives, here's the kind of thing you can expect:

After the end of last semester I got home with every fiber of my being feeling totally relieved. Finally, I was out of the pressure cooker environment of Duke and could relax a little more. I do like being at Duke, I was just ready for a break from the intense environment here. After taking about a week to myself, I began applying to jobs for summer employment. I started with tech based internships to build a good resume for a computer science major, when that failed I went to the more typical retail/service/food job applications. 20 or so applications in, I started to get a bit nervous. I started branching out more, and found myself applying to local golf courses. Most of them weren’t hiring anybody, but one ended up calling me back. This course had a full time job available for the summer and I’d get paid $7.50 an hour. After all of the panic of searching without any positive results, I jumped at the chance and took the job immediately. (Little did I know that the job was half lawn mowing and half weedeating ditches and trimming thornbushes by hand. But hey, work is work.)

A little while into this job I started to realize just how good I had it back at Duke. No, I don’t mean the difficult physical labor, that was hard but I didn’t mind it. No, I mean the people I worked with. The employees I called my coworkers included one rapist, one serial rapist, one decent man who was relatively unprejudiced, one man who was a pretty reasonable person but was still quite prejudiced, and a sixteen year old who wanted to grow up to be just like the serial rapist. (Note: I found out about the serial rapist when he bragged about how he used to get girls drunk to the point of being unconscious and then have sex with them. The other rapist then laughed and told the story of when he did something similar.) So, we’re talking about a pretty wide spectrum of people here. Oh, and my boss was a birther, said he was ok with “the f-gs” so long as they didn’t touch him, and was convinced that white people are naturally more hardworking than all other ethnicities. So a real charmer. By the way I describe them, you may be beginning to get an impression of how I dealt with this situation. I hid behind a veil of dry sarcasm to prevent myself from suffering a mental break but never having to commit the workplace suicide of telling them any of my real opinions. It sort of helped that none of them understood sarcasm.

About two months into it I was having a bit of an identity crisis. I’d obviously not come out to anybody at my workplace, but I had also never explicitly denied anything. For an example of what I mean, I present this actual situation: I was edging and mulching planting beds around the parking lot of the clubhouse when my boss drives up in a golf cart and tells me that if I’d like to work on the bed near the pool next, he’ll let me. I should mention here that the reason he presented this like a gift is because most of the other people that work there liked to work near the pool in the afternoons to watch women who are sunbathing in bikinis. When I said I didn’t care, he asked, “What, are you gay or something?” I responded, “Not quite, but seriously what do you need done?” This answer put him off a lot more than I expected and he drove off disgruntled. I guess a lot of sarcastic comments like that built into a reputation for me, and many of the workers would refer to me as “queer”, “homo”, “fag”, or “faggot” about half the times they wanted to get my attention. Also, they had a little joke amongst themselves that if any of them were left alone with me, I would sodomize them. After a while, I started to wonder if I should be challenging them on it. Deep down I knew it wasn’t my responsibility, I knew that no real gain could come of me engaging the group about their homophobia, racism, or sexism. Yet I still felt like every time I just took it when they called me a faggot made me a weak person. I felt like a total coward, but I knew there was nothing else I could do.

One day the coworker that I mentioned earlier who was pretty reasonable but was also prejudiced finally picked up on my facial expression after he used gay as a pejorative. He then asked me if I had a problem with him using the word. Here’s how the conversation went.

Me: Do you hate gay people?

Him: No. Actually, I don’t think I’d mind if they could marry.

Me: So when you call something gay, what do you mean?

Me: You mean it’s something you dislike.

Me: But you said you don’t hate gay people.

Me: Then why do you use the word “gay” to refer to things you dislike?

He didn’t mention it for a day, then came back two days after we had the conversation and told me that he considered it, and he wasn’t going to say it anymore. Best part is, he kept his promise.

I did gain a lot from this summer, as it gave new meaning to my work here at Duke. BDU, this blog, and my work at the Center seem even more real and relevant when I consider that there are people out there that have to experience what I did this summer with no foreseeable end. While that thought makes me angry, it honestly makes me more determined than anything else. Forums like this blog are rare, and though I obvious come from a biased viewpoint on the matter, having a place where the LGBT community can share and discuss their life experiences is so key to coping with the isolation that many of the members of our community feel. Here’s to an excellent year, for all of you, the blog, and the entire spectrum of people that belong to and affiliate with our community.

So on that note let me proudly announce that Our Lives is officially back! Well, we never really leave, but we're going to restart posting on a regular basis. The rate of posting will likely increase as we get more writers, but expect regular posts to be going up from now on! If you want to get involved with the blog as a writer, email me and we can get you set up as soon as possible! Also email me with any questions you may have about the blog, I'd be glad to answer them.