This past Thursday the Center for LGBT Life and Blue Devils United teamed up to bring an event called OUTstravaganza to East Campus. Down on the main floor of marketplace BDU members and Center Staff waved rainbow flags and guided people upstairs. When people arrived in the space above Marketplace the Center had a table set up for Ben and Jerry’s to serve ice cream to hungry first years and older folks. Music played in the background as people socialized with each other. The Center for LGBT Life had a display set up to introduce what it does to the new students. BDU had a table set up in the room as well that was passing out rainbow flags for free, and getting new people signed up for the listserv. Over 100 flags got passed out to students who wanted to show their support for the LGBT community at Duke. Here's to the start of another exciting year! 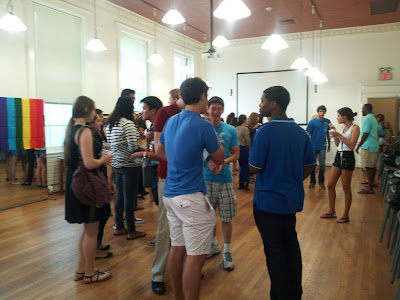