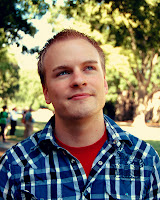 I am a 21-year-old gay, Catholic, analytical, somewhat musical male. I'm also confused as hell about life right now, but I imagine that will pass someday (maybe not!).

While I'm not a big fan of such attempts to describe people, reductive analysis does tend to reveal certain underlying features (structural details, one might say). Which parts of your you-ness are most important to you?

The unofficial Duke motto is "Work hard, play hard." And it's a fitting one, I think. The fact is, there's simply not enough time in the week to devote yourself to all too many activities. Additionally, there are too many people to know everyone all too well. As a result, this sort of quick reduction is almost a necessary mode of functioning. Who's he? Oh, he's in band. She sings in Chorale. These two write for the Chronicle. She does Vespers. He's in the Pitchforks. (note: these are far from representative :P)

This being the case, it seems that many students fight tooth and nail for even a second identifier. She's in [sorority] and she's premed. Speaking from my perspective, it's definitely a somewhat frightening notion that people will see me as one thing and one thing only.

A lot of people complain about self-segregation at Duke. They're usually talking about racial self-segregation, but it goes way beyond that. People self-segregate by major, religion, sexual orientation, gender, socioeconomic status, social standing, and a whole host of other things. Why is this? I certainly think one reason for it is that we want to spend time with people who understand what it's like to be [adjective]. Simultaneously, I also imagine that if I'm hanging out with people who are also [adjective], I'm going to be seen as more than just that. It's like those little travel games or hidden message things where you put on the red glasses and it lets you see what's under all the red ink--when your primary descriptor is nullified, you're required to look beyond it.

I think perhaps the broader idea is that people are looking for meaningful friendships and they believe that they are likelier to find these in people who have certain things in common with them (the popular idea is, the more you have in common, the better).

I'm not going to refute this quite yet (I'll get to my rant on friendships toward the end of the post). For now, let's talk about being homophobic versus accepting. At our last discussion, some members of the Catholic Student Center asked, "How can we make the community more welcoming?" I answered something like, "Well, you are welcoming. Now you just have to figure out how to let people know that." But, honestly, I was really only talking about those people, right there. Are the Catholics okay with my sexuality? Are the frat guys? Does it really matter?

Sometimes it's pretty uncomfortable hanging out with certain Catholic friends of mine. I have this nagging thought that maybe they're just judging me the whole time. Maybe they're hanging out with me in hopes that they'll show me the light and that I can be saved from fiery death. Similarly, with other friends, well, maybe they're totally fine with it, and maybe the fact that we've never talked about it means that, but maybe it means the opposite. We're all insecure sometimes, and while I think I'm getting better at not feeling like I need to prove myself to people as a gay man in this heteronormative society, sometimes I need to have discussions with people and know that I'm, for what it's worth, approved of (which is ridiculous! I don't need to "prove" myself to people as Catholic, or as being from Montana, or as any of the other things I am). While I could, hypothetically, spend my life hanging out with people who don't approve of me and trying to convince them of my humanity and personhood, that just seems like a huge depressing waste of time. It's really a mental burden to have to spend time with people you know don't approve of things. And to worry about it--does this person know? S/he's Christian--does s/he think I'm going to hell? Great.

I wish I could just say, "Forget it! I don't need your approval." And I'm getting better at doing that (or at either ignoring or attempting to educate the people who don't approve). But it's hard for me and probably always will be.

What's the solution? There's no easy one. Don't reduce. View people as whole people. Don't turn certain adjectives about a person into what you see as his/her identity. Don't put me in a box and I won't put you in one. Okay? Sometimes I'll fail, and sometimes you'll fail, but we'll keep trying. This is oversimplified, I know, but it's one place from which to start thinking about it.

Lastly, my quick rant on Duke friendships:
Posted by Matt at 9:47 AM