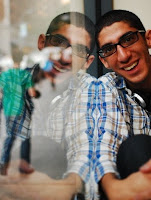 [Ed. Note: Every other Tuesday, Ari will be reviewing gay-themed movies. No, not those kind (ask him in person for those reviews). I swear by his judgment in films, and you should too :) ]

A film's ability to separate politics from the universal struggles of its characters can be considered its finest achievement. In Eytan Fox’s second gay-themed film “The Bubble” (Ha-Buah in Hebrew), the director hopes we as an audience do exactly that; put ourselves out there and perhaps gain new perspective by leaving our politics at the door. “The Bubble” is certainly as politically charged as it gets, tackling such issues as the Israeli-Palestinian conflict, gay love, and naïve activism. Although in the foreground of the story, Tel Aviv plays a vital role in establishing the ever-growing liberal mindset the city has instilled in its people. The title refers to the fact that this city has become isolated, in recent years, from the turmoils and civil struggles between Jews and Palestinians that occur just outside of its borders.

When Noam (Ohad Knoller), who works as a reserve officer in the Israeli Defense Force, leaves his ID at a Jerusalem checkpoint, Ashraf (Yousef Sweid) arrives at his apartment to return the card and the two strike a bond instantly that of course, spills over to what you would expect. As the two continue to meet on and off (Ashraf oscillates between Israel and the West Bank) Noam’s roommates Lulu (Daniella Wercer) and Yelli (Alon Friedman) set up a drug infused protest to object the current occupation in Palestine and to promote peace in the region.

The movie juxtaposes the norms both outside and inside Tel Aviv to show the inner workings of the two characters. While Noam lives the easy life within “the bubble”, Ashraf deals with the everyday pains of being closeted from his parents and older sister. Here, we continue to see how nearly indiscriminate geographical boundaries lend to a much more complex war on values. The beauty lies in the film’s ability to tackle issues in a way that doesn’t seem to undermine one side or the other, and yet provides an active voice against homophobia that doesn’t seem forced or overdone.

On a more political note, however, “The Bubble” tends to fall under this childish notion that peace can be achieved through an organized rave on the beach. Although the prospect of a protest full of ecstasy-riddled twenty year olds has much to be desired in terms of efficacy, the director wants the audience to believe in the purity of the cause. The reality of the conflict is displayed in both serious and comedic interludes throughout the film, and yet maintains the level of earnest you would hope to expect, both in the depiction of the relationship between Noam and Ashraf, and the conflict that continues to keep men like them apart. B+