“When my son told me he was gay, I told him, ‘Now, I love you more.’ I want to tell the world that hatred is not born with human beings, it is a seed that is planted by adults and is fostered creating a climate of intolerance and violence. We must change our ways and understand that anyone …could have been my son. And I want everybody to know that Jorge Steven was a very much loved son.”
- Miriam Mercado

On Sunday night, members of the Durham/Duke community gathered downtown at Durham Central Park to honor the lives and reflect on the deaths of Jorge Steven López Mercado and Jason Mattison Jr. The vigil was just one of over 20 held across the country yesterday.
Jorge was 19 when he was killed November 14 in Puerto Rico for being gay. His body was found on the side of a road "partially burned, decapitated, and dismembered, both arms, both legs, and the torso" (from Pam's House Blend). By all accounts, Jorge was an incredibly loved boy who sought to put his mark on the world of fashion design.
This murder has revealed not only the unfathomably sick nature of an individual, but also a paradigm of ignorance and intolerance among those in positions of power. As a community, we were appalled to read that a police investigator (and bigoted idiot) for the case publicly remarked, "'people who lead this type of lifestyle need to be aware that this will happen." Furthermore, the investigation has shed light on Puerto Rico's lack of legislation in this area: "Never in the history of Puerto Rico has a murder been classified as a hate crime. Even though we have to follow federal mandates and laws, many of the laws in which are passed in the USA such as Obama’s new bill, do not always directly get practiced in Puerto Rico," explained Christopher Pagan, a Puerto Rican who first alerted American media of the story.
15-year-old Jason Mattison Jr. was also murdered this month in his hometown of Baltimore. Jason was found shoved into a closet "raped, gagged with a pillowcase [and] stabbed repeatedly in the head and throat" (from The Baltimore Sun). The boy aspired to be a pediatrician: "There was never a question of whether or not he was going to make it. Some children we have to pray over a lot -- pray for grades that they pass, but we never worried about that with Jason," said Principal Starletta Jackson. The suspect, Dante Parrish, 35, is a family friend who had recently been released from prison after serving 10 out of a 30 year sentence for his involvement in a 1999 killing. The research of a nonprofit legal group The Innocence Project led to the discovery of a technicality with Dante's proceedings that led to an overturning of his conviction (from Pam's House Blend).
The Durham vigil last night featured musical and spoken tributes to those who have been senselessly taken. Personally, this was one of the most powerful and inspiring events I've ever been a part of. While I rode a Kübler-Ross-ean emotional cycle of confusion, anger, and sympathy for two people I had never met, I was consistently able to find solace just in the faces - hell even in the mere presence of the friends and strangers surrounding me. Yes, this is incredibly cheesy and run-of-the-mill of me to say, I understand. But there is something to be said for a selfless gathering of people on a cold, cold, rainy Sunday night in the middle of Durham (read: in the middle of America) in order to express solidarity with each other, and with the community at large. Feeling unqualified as a writer (I'm an engineering student) to effectively convey the emotions and messages from the night, I'm compelled to embrace the cliché here. We've heard some quotes to the point of desensitization, but in this case the overwhelming level of relevance and retroactive empathy trumps, for me, the risk of being tiredly proverbial:

"Moreover, I am cognizant of the interrelatedness of all communities and states. I cannot sit idly by in Atlanta and not be concerned about what happens in Birmingham. Injustice anywhere is a threat to justice everywhere. We are caught in an inescapable network of mutuality, tied in a single garment of destiny. Whatever affects one directly, affects all indirectly."
-MLK 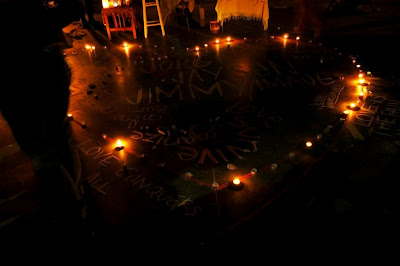 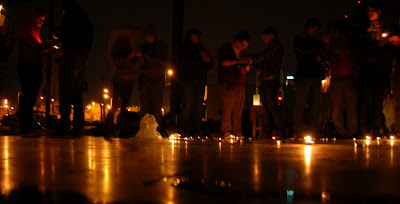 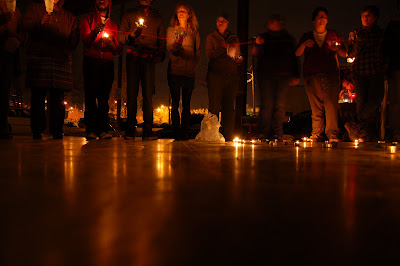 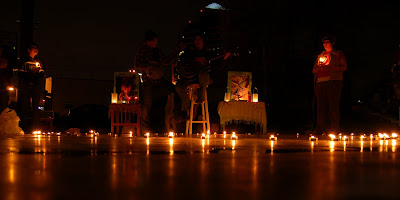 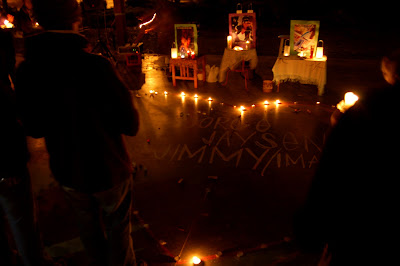 All pictures from the night are courtesy of our friend Justin Harris. Click on any image to enlarge.
Posted by Chris at 9:29 AM