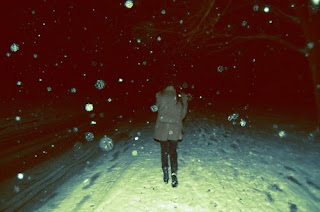 [In addition to all of our awesome visible and identifying columnists, we also have some awesome anonymous columnists that for one reason or another must use a pseudonym (and pseudopic?). Details on anonymous columnists here.]
Last Friday afternoon I finally had my pride flag installed. I was feeling a bit apprehensive about it.
I signed up for a pride flag because I had always promised myself I’d come out in college and I was going to do so my Freshman year. I’d never been one of those people who flaunt their sexuality (because I don’t make it a habit to flaunt anything) but the flags around campus always put me at ease, and I like seeing them—why not add to the numbers?
Still, I was apprehensive.
I wasn’t ready for a flag. I had all sorts of scenarios about what would happen when I put my flag up. One scenario I imagined that didn't seem completely farfetched was that my relationships with others—the other girls on my hall, my friends, everyone—would change drastically when it was finally up.
I had originally planned to have my flag put up the day of or after Coming Out Day at Duke. It would be the ultimate culmination of my assimilation into the queer community. However, after putting it up I realized doing so on Friday was the best thing. When students come back from Fall Break it’ll just be there. They’ll probably disregard it; maybe think about it for a moment while unpacking from visiting friends and family. They’ll realize that they already like me for me and this extra factor isn’t all that monumental. To them, it’ll be something that can be actively disregarded but passively reminding them that I deserve respect too.
Regardless of how much I try to allay my anxiety with positive probabilities, I’m still apprehensive. I know it seems silly, but this is the first time I’ll be “out” to a group larger than 6. I have a few worries about my flag sending the wrong message and of my parents seeing it when they come around, but I’ve already grown fond of it and I’ve decided it’s not going anywhere. Flag number 28 will be displayed proudly from my window for the rest of my freshman year. With such a strong and supportive community (which this blog and the many posts that make it up serve as a reflection of) I can confidently say that regardless of what happens I won't remove my flag.
Posted by "Ebony Way" at 7:05 PM