Hi. My Name is Brandy. PUKE! 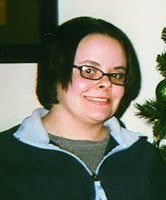 I’m gay. I’m out. I go to the Center. I can walk through the doors without my face feeling hot…I can sit in the back room without my hands shaking…and I can say hello to the people who work there without staring at the floor.

This is a big improvement from a year and a half ago when I took Janie’s class Clinical Issues for LGBT. During breaks, I would go to the bathroom to see if my face was red because it felt extremely hot. I would hide my shaking hands under the table and I would try really hard to make eye contact while talking.

Sometimes I would cry out of happiness on the bus ride home from the class because I was so touched to sit in a room with queer people. It literally made my day when one of the people I knew wasn’t straight had a conversation with me. Sometimes I would cry myself to sleep because people said things that I found very hurtful. I was sad because the L, G, B, and T are not one happy family. Needless to say, it was a little bit of a roller coaster and I probably wasn’t comfortable enough with my sexuality to take the class in the first place.

I have grown a lot since taking the class. I am more accepting of myself. I even have “interested in women” listed on my Facebook page. Despite this progress, sometimes I worry that I just put on a façade of being a comfortably out queer person. I say this given part of me doesn’t feel like a “real” gay. I know that this is a little ridiculous because what the hell is a “real” gay is in the first place? The not-so-rational part of me says that, in order to be a “real” gay a person has to experience knowing that they are queer without anyone else being aware of the fact.

I never endured the pain that occurs when a person knows that they are queer, but hasn’t told anyone else. I realize that this is probably a horrible experience…isolating and alienating to say the least. But, all the same, part of me wishes that I went through it. I would be able to share this experience with other people when they talk about coming out. I would be able to feel a sense of connection when they mention how they knew they were queer, but couldn’t manage to tell anyone for a long time.

Intellectually, I think the not-so-rational part of me is interesting. It says that in order to be a “real” gay a person has to experience knowing that they are queer without anyone else being aware of the fact. Even so, not every queer person has been in this situation. I know because I’m one of those people. This experience plays a fundamental role in coming out stories when they are circulated within the LGBT community. I want my story to fit within this all too prevalent model. I want to be a “real” gay. Yes. I’m attracted to women and not attracted to men…but sometimes I still don’t feel like a “real” gay.

My feelings of inauthenticity are partially derived from never being out to myself without being out to other people. I have explained this in detail above, but I’m still glossing over a large portion of the picture. Part of me wants to pretend that I’m putting it all out there…that this is the only reason why I don’t feel like a “real” gay. But, I’m not being completely honest. I also don’t feel like a “real” gay because I don’t call myself lesbian…because I initially came out as gay and bisexual…and because my interest in D/s means gender isn’t always the most important thing to me. Simply put, my sexuality is complicated…it doesn’t fit into a nice little box. But, I like labels. Of the multitude of identities potentially available to me I could choose gay, lesbian, bisexual, queer…any combination of the four or I could keep it simple with “no labels please.” I’m a fan of complex messes so I choose to call myself gay.

Sometimes I flat out say I’m gay. Sometimes I let people assume I’m lesbian. Sometimes I keep it short by saying queer. I usually use that word when I want to avoid the hour long conversation that starts with “I’m gay, but not lesbian…and no I don’t just refuse to call myself lesbian because I’m a patriarchal misogynist that is afraid of female sexuality. In reality, my interest in D/s complicates my experience.” I hate this conversation because, the very few times I have had it without burying my face in a hoodie, it has ended with me thinking “don’t tell me what YOU think I am or what YOU think I should call myself cause if YOU do so I will gladly ‘cut you’ (as Justin says).” The need for this conversation and my reluctance to start it, along with never having the experience of knowing I’m gay without anyone else being aware of the fact, makes me feel inauthentic. It makes me feel like I’m not a “real” gay.

Despite these feelings, I’m slowly I’m becoming more comfortable. My face doesn’t get hot any more, my hands don’t shake, and I can look people in the eye. But, I’m still making my way out from underneath the hoodie. I say these things knowing that most people probably perceive me as being very out. I suppose I am very out…my friends know, my family knows… Facebook knows. But, I don’t always feel out. I don’t always feel okay with my sexuality. Sometimes I catch myself being biphobic which saddens me because activism around bisexuality gave me the courage to come out…while I only call myself gay at the moment the B helped me be okay with my interest in D/s. Sometimes I’m afraid to be out around women who identify as lesbian…I don’t want them to think I’m any less of a “real” gay because I don’t use that label. I guess I still have wok to do. I’m trying to contain the not-so-rational part of me that says I’m not a “real” gay. With time, I suppose this issue will pass…I can feel it becoming more distant as time goes on.

After taking Janie’s class, it took me quite a while to go to a BDU meeting. I would tell my roommate, the president by chance, that I would go every week. At the last minute, I would back out. My excuse…I can’t go because I will get so nervous that I will puke all over the floor. That isn’t a very good introduction. “Hi. My name is Brandy. PUKE!” My roommate said I was being ridiculous. If I puked she would simply summon Aliza to clean it up, act like nothing happened, and continue on with the meeting. The thought of seeing this post on the blog makes me feel a little queasy. People will know my big fear of not being a “real” gay. They will know that I’m not comfortable with my sexuality all the time. They will remind me that I wrote this post by mentioning it when they see me. I’m tempted to not send this post to the editor. I’m tempted to put it up anonymously. My excuse…I can’t do it because I will get so nervous that I will puke all over the floor. But, my roommate was right, that excuse doesn’t really hold up. I didn’t puke at a BDU meeting and I probably won’t puke over a blog post. If I do, maybe Aliza will offer to clean it up, we can act like nothing happened, and we can continue on with everything else.
* * *
Considering I graduated in May, this will probably be my first and last post on the blog. As a result…shout outs to Viviana and Hassaan for escorting me to the Center and to BDU …thanks for telling me about the queer people on campus. Shout outs to Jack and Gina for listening to me talk about my sexuality while hiding under a hoodie. Thanks to Cody for putting up with my very awkward Common Ground coming out back in the day. Thanks to Janie for acting like nothing was out of the ordinary even though I stared at the floor when I was first introduced to you. Much love to Chris (Purcell and Perry) for helping me feel more comfortable by making endless jokes about D/s. Last but not least…thanks to Peggy Ann for being a welcoming face even when my face felt hot and my hands were shaking.
Posted by Brandy at 2:50 PM