It Gets Better (Ian) 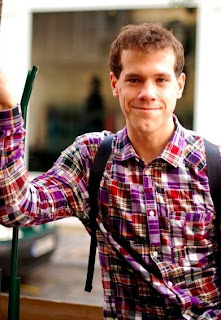 [Ed. Note: Got this in my inbox last night from Ian Ballard - really glad he's sharing this with us :) Thanks, Ian! Perhaps this is a theme that others who just want to post once would be interested in contributing to?]
I never thought I would write anything for this blog but I was inspired by Dan’s post. These stories are important to disseminate and I hope mine will help someone. I would also like to respond to an anonymous post by someone who was offended by the “closeted frat guys” stereotype. Since I don’t plan on posting again, and I’m a senior and have a lot to talk about, this is extremely long. Skip to the end for important bits.

I first remember questioning my sexuality in fourth grade. This story is not that important but I think it’s kind of cute. We were in sex ed class getting the speech about how everything is normal (wet dreams, smelling bad, etc). I remember almost raising my hand to ask if it was normal to picture your friends naked (all my friends were male). Something stopped me and told me it wasn’t a good idea, so I sat silent, but for some reason this memory stuck with me.

Freshman year of high school I had accepted I was “bisexual.” I fell in love with my straight best friend. I was wrecked by guilt and shame. I started starving myself and lost almost 60 pounds in 6 months. Through some stroke of luck I snapped out of this period and gained some weight back.

By junior year of high school things had begun to go very badly. I started getting panic attacks and I could no longer handle eating lunch in the cafeteria. It was against the rules to leave so I took whatever opportunity I could to sneak out and hide in the bathroom. The shame I had for my love of my best friend had become so painful that I stopped speaking to him for over a month. It destroyed our friendship.

I felt doomed. I felt that I would fall in love with every male friend I would ever have and would never meaningfully connect with anyone. I felt that everyone would abandon me when I came out, or at least typecast me and deal with me like I was some strange animal. Worse, I thought that even if I came out I would find no solace in the gay community. I knew only what I had seen on television about gays. I thought they were all sassy, loud, and shallow, and I would never be happy with them. Not only would I never find love, but all my straight friendships would be lies and would fall apart when I could no longer handle the shame of secret and perverse love. I was often suicidal.

Things began to turn around when I made a new best friend, one whom I did not love. He was the first person I came out to. I was 17. We were in the cockpit of my boat and I had been crying for two hours. The sun was coming up and we both had work to go to. I finally blurted it out and he was angry: “you made me sit here and listen to you cry for that? I thought you were going to tell me something important.” The idea that this was not important was totally new to me. I started telling more people and my mood began to improve. Though I never fully came out in high school, I had told most of the people important to me.

Then I came to Duke. College was not what it seemed and I felt like it would be impossible to be out of the closet here. One day I sat in the Bryan center and hyperventilated for twenty minutes before working up the courage to go to my first Fab Friday. It was helpful, but things were different back then and Fab Fridays were not terribly comfortable even for those comfortable with their sexuality. Those first few months at Duke, I spent many of my weekend nights curled up under tables and desks thinking about how I was going to kill myself. Drunkenly, I came out to my first friend at Duke – a republican catholic who did not believe in premarital sex. Luckily for me not all stereotypes are true, and he was strongly supportive of me, if a little taken aback. This was encouraging. I came out to more of my friends, though news spread faster than I had anticipated. Ultimately, through the help of my friends, therapy, and SSRIs, I got back on track by the end of first semester.

This is where the story gets better. In 3 ½ years at Duke, I have never once felt victimized by anyone. Not so much as a dirty look. I had a two-year relationship with a boy I loved, and my friends were accepting and no one seemed to mind when we held hands on campus. The most shocking thing about coming out is how little changes. I had a few problems with those that tried to force me into the sassy gay best friend role, but I let those friendships drift and it wasn’t a big problem. None of my close friends treated me any differently. This is where I would like to respond to the anonymous post. The fear of being typecast is real and powerful, even if you are comfortable with your sexuality. Being gay carries with a multitude of stereotypes that I, and many others, don’t want to be associated with. Plus, when you finally get a handle on things to make being gay not the most salient part of your identity for yourself, the last thing you want is to have it become that for everyone else. I can’t speak for the Greek community because I have very little interaction with it. However, nearly everyone I’ve spoken to on this campus, Frat-Stars included, is insightful, thoughtful, and open to new ways of thinking. Coming from someone who feared being typecast above almost anything else, it will undoubtedly surprise you how accepting people are once they are forced to think about something instead of mindlessly echoing stereotypes. At least at Duke.

To those still struggling with these issues, I recommend going to the center. Even though I have accepting friends, it is for some reason immensely comfortable to be around gay people. It has been invaluable to me at Duke. Not that it is a panacea, they are a group that, like all special interest groups, suffers from the fact that everyone is there because they share only one thing in common. The conversation can be hypersexual and shallow and stereotyped, but hanging out at the center doesn’t mean abandoning all your friends. There is something powerful in spending time with people who understand who you are and what you’ve been through. And, of course, there are many genuine, interesting, fun people there.

I still get panic attacks. I still get depressed. These are not rare problems for gays. Though I understand there are other factors, I blame my years of struggle with my sexual identity for many of my psychological problems. That being said, those scars get fainter all the time. Years after coming out and realizing that no one really cared, I can feel myself becoming healthy and whole. Duke has come so far since I was a freshman and I hope others can take advantage of the opportunities here as I have.
Posted by Blue Devils United at 9:00 AM