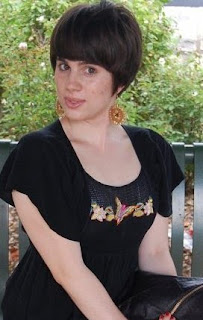 [Note: I know some of yall were looking forward to me writing more about sex. I will be. I'm in the process of figuring out how I can write about girl-on-girl sex in an inclusive, fun and legal way, while protecting everyone's privacy. You know how it goes. Feel free to leave me comments about what you'd like to see.]

Here are my ill-informed fantasies of what would happen in each case:

Copenhagen, I imagine- drag kings, vogueing, Scandinavian style, for once not having my sexuality be a dull hum in the back of my mind (it used to be a rock concert, I’ve since mellowed), walkbility, livability, world renowned woman-oriented sex stores. [Ed. Note: NSFW (unless you work at a sex store).]

I know I’m reducing Copenhagen down to a clean, livable LGBT utopia. But who cares, since no one would deny it?

Copenhagen has its cons. It’s $20 for an average hamburger expensive. It offends my anti-Eurocentric sensibilities. Am I living my life according to Stuff White People Like? Is studying abroad for me all about accumulating sexual partners, binge drinking and partying?

Which leads me to Istanbul. A megacity/megaslum straddling Europe and Asia. Secular, but with a majority Muslim population. Layers of history on every street corner. Turkish tea. (Is my Orientalism showing?) Classes on Islamic art and architecture, Urban Economics and Transportation Economics. Lightly “immersing” myself in language that I might find interesting and useful enough to pursue when the semester ends.

But Istanbul is NOT GAY ENOUGH. It just isn’t. If Istanbul has a thriving female-identified queer scene, it certainly is not showing up on my Google searches (which are mostly generic Istanbul Gay & Lesbian Travel Guides- apparently LGBT people don’t actually live there.)

I can’t deny that my sexuality is at the forefront of my study abroad decision. I’m so over being the weird lesbian girl from high school. While Duke was a step up, getting a date/getting laid is still work (werq?). Yeah, I’m all about “staying and fighting” and “pride bigger than Texas” but even I feel like busting out. Since when was I the mistress of LGBT purgatory, suffering alone so that debonair urbanites didn’t have to? I can inject LGBT life into the gay ghost towns of the world without sacrificing my well-being and potential.

I’m done with taking risks on places whose LGBT-friendliness is not well-established. I’m tired of being told by non-LGBT people that some place is “gay-friendly” when what they really mean is that I won’t consistently get called fagdykewhorebitchslut or mauled if I decided to kiss another woman in public. I’m tired of LGBT men telling me someplace is gay friendly when what they really mean is that men have a scene and a voice, but women don’t. I’m sure many of yall know how it feels to expect a LGBT haven and realize that the community was unaccommodating, whether because of your race, class, gender expression, gender identity, sexual orientation, confusion, fluidity, ambiguity, body type, taste in music…the list goes on.

How many LGBT people do you know who have studied abroad (or lived and worked for an extended period of time) in a country known for its mistreatment of the LGBT community? The kind of place whose name elicits a "Why would you ever go there?" from confused LGBT comrades. Is everything just part of a gradient…can one person’s San Antonio be another person’s New York? One person’s Istanbul another person’s Copenhagen? One person’s Uganda another person’s Jamaica? From Sao Paolo to Little Rock, we are all armed with a vague sense of where we came from and where we think we are going. I’m from Texas and want to end up in the American Northeast. Of course this affects how I view Istanbul.

When has LGBT life ever been the featured reason why I chose to go somewhere or do something? Maybe it’s time it should be.
Posted by Veronica Lillie Ray at 4:00 PM