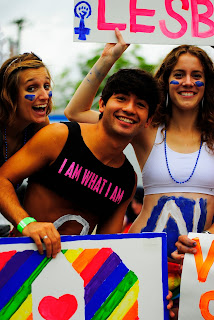 [Ed. Note: Last year, we started to recap BDU and Center events with pictures and firsthand accounts. This past weekend was the 27th annual NC Pride Parade, which began right here on Duke's East Campus! A friend of the blog, Chelsea, was awesome enough to share her thoughts with us. And a special thanks to Robert and Cesar for use of their pictures.]

Last Saturday, September 24th, I participated in my first Pride parade. Being what we call a “straight ally” and having lived most of my life in a country (Italy) where LGBT Centers are underground and the idea of supporters doesn’t really exist (and we also have the Pope? Minor detail), you can imagine how this opportunity had not made its way toward me in the past. But this weekend it did, and I immediately jumped on that bandwagon… But actually. I climbed on that float, lathered my torso in body paint, through my hands in the air and cheered on like there was no tomorrow.

Last Saturday, the sky was dull and it poured, but that didn’t faze us. Durham was vibrant. Durham was a bubbling melting pot of people of all different kinds of backgrounds, ages, sexualities and beliefs who stood as one while asking for a simple request: let us all be equal.

There are two levels on which one could experience NC pride: first, you had the more general aspect which entailed a herd of advocates for equality parading down the streets, as most Prides go. But on the other side, you had the Duke/Durham level, where one bonded with their community, home or home-away-from–home; where one lent a helping hand to a peer; where one celebrated while embracing their best friend, smiling at their RA, cheering with their lab partner, high-fiving their professor; where one could directly reach out to their neighbor, friend, significant other, relative, passerby and affirm, “This is for you”.