What the Marriage Amendment Means to Me 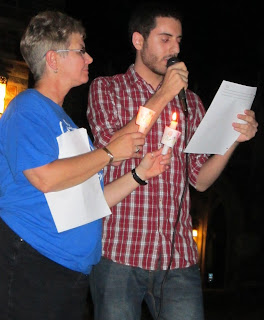 [Ed. Note: On Monday Night, Duke hosted a candelight vigil (Chronicle coverage here)to protest the anti-LGBT amendment that was recently passed in the N.C. state legislature (at the time of the vigil, the House of Representatives had passed it and the Senate had not yet voted). By clearing the NC General Assembly, the amendment will appear on the ballot in May. Read more about the bill here, and if you've registered to vote in N.C., and join the FB group to figure out what you can do to stop this bill from becoming a N.C. constitutional amendment. Below are Ryan's reflections on what the marriage amendment means to him. Ryan is a second-year student and a North Carolina native. You can read Sarah's thoughts on the vigil here and more about the vigil at Pam's House Blend. I also recommend reading Megan's remarks and watching Dean of Duke Chapel, Sam Wells's speech (see video in post above, text here).]


Good evening everyone. My name is Ryan and I’m a second year student here at Duke. I’d like to share some thoughts with everyone on this amendment, as a resident of NC, an LGBT identified man, and as a concerned citizen. To me, this so called “Defense of Marriage” bill is more than just a redundant amendment that only recognizes marriages between two people of the opposite sex. Instead, it will marginalize LGBT identified individuals who are already considered second class citizens. As you may well know, this amendment will guarantee that domestic partners will not be eligible for healthcare and insurance benefits. Even more so, it seeks to undermine what little progress which has been made to curve discrimination against LGBT identified individuals in North Carolina. As a resident of North Carolina, I can attest to the volatile political climate relating to LGBT issues.

While Duke and Chapel Hill are incredibly progressive and welcoming of LGBT individuals, my own observations of attending public school in Winston-Salem for 13 years were anything but welcoming. Sexual identity and health as it pertains to same-sex couples was never treated in the classroom. LGBT issues were never discussed as the topics were considered taboo. Friends from my High school wanted to create a Gay-Straight alliance, but were faced by such avid and open opposition by several members of the school’s administration that no teacher was willing to head the club for fear of losing their job. Attending such a school discouraged me from exploring my own identity as a gay man and prevented me from making a connection with what was a nonexistent community.

Coming to Duke, where rainbow flags hang from windows and nobody seems to care about who you love, my eyes have been opened to a potential world where I don’t have to be ashamed of who I am. To me this bill means more than being prevented by a law that is already in place to marry my future partner or even not being able to receive benefits from my partner’s employer. Instead, this bill means that North Carolina, the state in which I’ve been raised in and have called home for the past 17 years, no longer welcomes me. And I just won’t have that.
Posted by risa at 8:00 AM