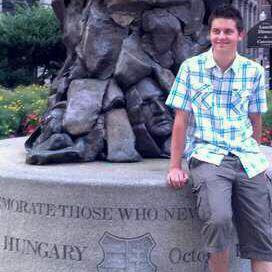 [Editor's note: Here at the BDU Blog we feel fortunate that Our Community (OC, anyone?) grows each year...mostly because it means we get new blog writers :-P just kidding! just kidding! Really, though, please welcome Kyle and stay tuned for more new faces in the next week. We're glad to have you!]

As a first year student here at Duke, one is always faced with some complicated choices. The first couple of weeks on campus are filled with a sort of identity crisis, where everybody struggles to create the beginnings of what person they want to be (or be known as) at Duke. As I’m sure many LGBTQ people would be able to relate to, I had another dimension to this decision. As a bisexual male, I had many options available to me, and I was unsure about which would be the best to take. Do I take my father’s advice and closet myself? Do I not go out of my way to act straight, but avoid affiliation with the LGBTQ community? Do I come out?

During Orientation Week, I decided to go to a few of the LGBTQ events that were being held for freshmen. These were nice, and I met cool people, but I’m substantially awkward in the initial phase of meeting people, so I didn’t really connect with the place. Then on the first Thursday of classes a friend and I decided to see how hard it would be to pull that most venerated of college traditions, (no, not beer pong) the all-nighter! We discovered at about 6:00 the next morning that this was not a fantastic idea. (Especially considering I had five classes that day) After my first class, I remembered that the LGBT Center had comfortable looking couches. Half asleep, I stumbled through the doors and mumbled a question, “Do you mind if I sleep on that couch?” The person (Jess, I believe) who answered just smiled and said, “Sure, that’s fine.”

Though this seems like a pretty minor thing, when I woke up I realized just how comfortable I was in the center. I wasn’t nervous. I didn’t feel the need to watch my mannerisms; I didn’t think people were “figuring me out”. I hadn’t experienced comfort like that since I discovered my bisexuality at the end of last year. That prompted me to go to a Blue Devils United meeting, which then prompted me to attend a blog meeting… so here I am!

So here I am, but who am I? To give you a little idea of who exactly it is that’s rambling at you through though the internet, here’s a brief overview of me. I absolutely adore music, though not mainstream music. I tend to gravitate towards the more unique stuff, and I have the biggest crush on Damon Albarn of anyone you will ever meet. If you aren’t sure who I’m talking about, look him up. One of my favorite things to do is act, especially in comedies. (stereotypical, I know) My other love is philosophy. I enjoy taking some quiet time every now and then to read works of fiction and philosophy and then simply thinking about them. As such, I imagine many of my posts will have some sort of philosophical tone. I also like to design and build things. I am a potential biomedical engineering major. I have desire to get some other certification as well (I waffle between a second major in philosophy or a double minor in theater studies and philosophy). I’m not terribly athletic, nor am I at all religious, so I won’t be a very good resource for readers with any of the potential issues that accompany those. That said, I’d welcome any conversation from people reading this blog.

A brief overview of my “queer story”, as it were, is as follows. I live in an area where LGBTQ discourse and activism is rare and very small scale when it happens. I spent most of my life assuming I was straight because I wasn’t aware of other possibilities. Around November/December of my senior year of high school, I began to discover myself. From there on I’ve been dealing with my sexuality, trying to peel away the layers of repression and internalized homophobia. I’m doing pretty well (as evidenced by me writing this blog post), but I still have a ways to go. Anybody who relates to this situation, or even anyone who just likes some of the things that I like, I’d love to hear from you. If you see me on campus, feel free to say hi. You’ll know me by my fauxhawk.