In which I return, a changed man. 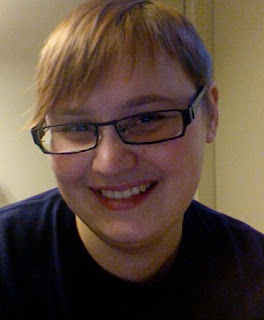 It's been a long summer, and even longer since I last wrote. A lot has changed! Among other things, I no longer feel the need to use a pseudopic on this blog, so now I am fully de-anonymized. Say hi if you see me!

I also came out to my parents, and they pretty much said they don't want to see me again for another decade, but I don't want to talk about that yet. (I actually can't talk about it yet. My throat closes right up.)

Instead, I want to talk about the changes that make me happy. I came out at work, finally, so I don't have to sit next to a sign with my girl name in all-caps when I'm on shift. It's changed in most of the internal systems too; I had a coworker comment that there was apparently a new guy named Lawrence, and when I told him it was me, he congratulated me.

Last semester, I had a lot of angst about how to come out in classes. This time around, I actually had Lawrence [LastName] as my 'preferred name' in ACES. It turns out that ACES is kind of an asshole about 'preferred names' so my teachers were given the name "Lavinia Bandersnatch (Lawrence)"* but that is a rant for another post. The important part is, all my profs either asked for Lawrence, or let us introduce ourselves and marked me down as Lawrence with no fuss.

Better than that: in French class, we were doing a group exercise where we had to mingle and find people who fit certain categories. I was the only senior, and the following beautiful exchange happened:
Classmate [talking to someone else]: She's a senior--
Me: He, sorry.
Classmate: Oh, I'm sorry! [Turning back to the other person.] He's a senior...

In another class, I happened to already know one of the other students. Before class started, I told him that I'd changed my name and I was going by Lawrence now, and he congratulated me. "That's really exciting news!" he said.

I don't use my "polite girl voice" so much. I've used men's rooms three times, and even used the men's shower earlier this week. I got turned down for a date because the girl in question was a lesbian - and yeah, that counts as good news! I bind every day. I'm pretty sure my tits have actually shrunk a cup size, which is a miracle I try not to investigate too thoroughly in case it reverses itself - but they don't weigh so heavily any more, physically or psychologically.

A close friend actually commented that I seemed much more masculine since I'd left for the summer. She thought maybe I'd started T, but I think I've just been settling into my skin. It's a good feeling.

*Ok, that's a lie, it didn't really say Lavinia Bandersnatch, it had my legal girl name on it. But I don't give that out any more so you get a fake name. I think it has a certain je ne sais quoi, don't you?
Posted by Lawrence at 8:15 AM