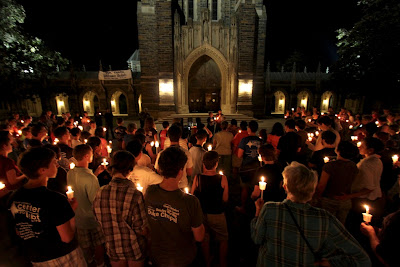 [Ed. Note: Last year, we started to recap BDU and Center events with pictures and firsthand accounts. On Monday Night, Duke hosted a candelight vigil (Chronicle coverage here)to protest the anti-LGBT amendment that was recently passed in the N.C. state legislature (at the time of the vigil, the House of Representatives had passed it and the Senate had not yet voted). By clearing the NC General Assembly, the amendment will appear on the ballot in May. Read more about the bill here, and if you've registered to vote in N.C., and join the FB group to figure out what you can do to stop this bill from becoming a N.C. constitutional amendment. A friend of the blog, Sarah, was awesome enough to share her thoughts with us. You can read more about the vigil at Pam's House Blend. I also recommend reading Megan's remarks, watching Dean of Duke Chapel, Sam Wells's speech (see video below, text here), and checking out sophomore student and NC-native Ryan's reflection on what the marriage amendment means to him. Also, special thanks to Chelsea and Ollie for lending us the use of their photos and to Jess Evans and the student volunteers for coordinating the vigil!] 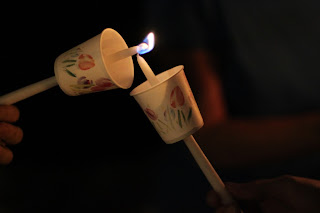 For my first vigil, the experience was subtle, hushed, but lifted me off my feet. It was like a breath of fresh air after being submerged in water for a slight period. There’s something heavy in the exertion as your chest burns with the contractions and expansion of your exhausted lungs. The burn came from my ignited candle, and that heavy something was indescribable in the wake of the moment. Though I had my mind half working on distributing candles and half catching the quiet, poignant, powerful words released into the wind and into the opened hearts of everyone participating, I could tell something shifted in me, around me. We are united; we don’t support this intrusion of one’s choices. Were we not a country opposed to such invasive cruelty? Was this country not incepted because select individuals refused to recognize our rights as human beings? Reverend Dr. Sam Wells put it quite eloquently: “Our nation’s Constitution doesn’t regard these qualities of our national life to be controversial, or even up for debate. It holds them to be self-evident. Self-evident.” 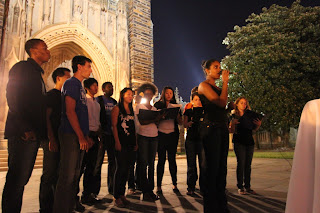 Monday night, we showed Duke University, we showed Durham, and in extension, we showed legislators of the state of North Carolina, that we cannot deny these rights simply because of these notions of marginalization. For many of us, North Carolina has allowed us to be ourselves, perhaps even for the very first time of our lives. And although I submit this in omission for various and personal reasons, know this: This state is my home, you cannot take that away from me. To see people rallying together against a bill that doesn’t take into the consideration of everyone here encourages me every day to be far more courageous than I was three, five, ten years ago. That night I felt overwhelmed, brilliant, like I belonged, like coming home.

Video of Dean Wells's speech begins at 3:00, courtsey of Pam's House Blend.
Posted by risa at 8:01 AM