An Ode to Dad 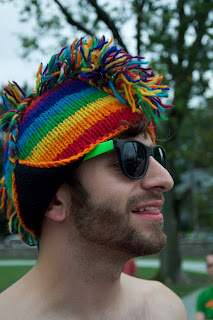 On the heels of the four-year anniversary of me coming out to my parents, I wanted to reflect a little bit about someone that I don’t talk enough about or give enough credit to: my dad.

If you’re a regular reader of this blog, or at least of my posts, you’ve probably heard a lot about my mother and how amazingly, wonderfully affirming she is. She may have even made you cry—as she has made me many times—with her life-affirming and nurturing love that only a mother can give a queer son.

But I haven’t really taken adequate time to tell you all about my father. My father’s journey was much more challenging than my mother’s and he struggled much longer with my sexual orientation than my mother ever did. But my father came around; he learned to be proud of me for exactly who I was, albeit with some trepidation. But let’s start at the beginning shall we?

I’ll never forget how my father reacted on the night I came out. After watching a Goosebumps marathon on Nickelodeon and feeling nostalgic as all hell, I decided that, for whatever reason, that was the night I was going to come out. I was just going to do it. I was just going to march downstairs and tell them. First I called my best friend Paige to make sure that she was on call in case things went badly and I needed a pick-up, and I called my brother to let him know that I was finally going to do it. For whatever reason, I couldn’t seem to find my parents in the same room that night. So I spent a few minutes wandering around the house trying to see if they’d naturally settle in the same place; when it became abundantly clear that they wouldn’t, I just asked them both to come downstairs, “I just have something I want to talk to you about.”

So now my mother and my father are standing across the island in our kitchen, we’re all standing up, and I jump in.

“There’s not really a way to preface this, so I’m just going to say it…Mom, Dad, I’m gay.” The words dropped to the floor, and my father let them crash and shatter at his feet. My mother, thankfully swooped in to catch them before they could break, and she began to do what any mother would do. She started asking warm, loving questions.

It was strange, because while my mom and I were talking, my dad only stood there. After about twenty minutes of talking with my mom, she was out of questions, and my father’s silence hung thickly in the room.

After he had finished, his silence no longer hung in the room; it was now suffocating, heavy, weighing down on our family.

“Well, I’m glad you’re being honest dad. At least we can work from there.”

The silence grew heavier and heavier.

“Could you at least give me a hug?” I asked.

“I’m not sure if I can do that right now.” he stated coldly.

And as the silence broke, I broke along with it. Something inside of me snapped—a fundamental string that connected me with my family, with my father, with my home, had snapped. So I ran. I didn’t know where I was running to, all I knew was that I had to get away from him. I ran through the cold rain of December in a cotton hoodie. I ran to the playground in my neighborhood, where I sat and cried, crumpled on warped wood. I called my brother; he couldn’t understand me over my sobs. I called my friend Paige, who eventually came and picked me up.

For the next week, my father wouldn’t say a word to me. He avoided me in the house, shunned me in the most hurtful way possible. He said it was because he didn’t want to distract me during mid-terms; I knew that was a lie.

I sat my dad down in our home office, and I started the conversation by turning the tables, “Dad, I don’t really care if you accept the fact that I’m gay, because you’re my dad and I will love you for the rest of your life, whether you accept me or not.”

For the next hour, my dad and I went back and forth yelling and cursing. He said it was a sin. He said I was going to hell. He said that I couldn’t tell his family, that I shouldn’t tell anyone else. At the end of his vitriolic rant, I shoved the card I had been keeping behind my back at him and stormed out of the room.

It was the beginning of a long journey that took two years, but eventually my father came around, but it was only because we both worked on it, because neither of us let the other one give up.

Two years later, my dad and I are sitting by the Christmas tree and he says, “Hey son, do you want to take a walk?”

As we wander the neighborhood, my dad starts to speak, his voice timid but firm.

I was a bit perplexed, because I couldn’t think of what he had done recently that was worth apologizing for.

“Two years ago, when you came out to me, when you told me that you were gay, I wasn’t there for you. In the moment when you needed me to love you the most, I didn’t love you, and I will go to my grave regretting that I didn’t. I just wanted you to know how sorry I am for how I reacted.”

This time his silence hung in the air, but it was warm, it was loving, it was gentle. Something that had been broken for a long time had been fixed. My father had finally picked the shattered fragments of my identity off of the floor and glued them together.

Now, my dad is fine with the fact that I want to go on to be an LGBTQ rights activist. He’s okay that I want to make a career fighting for my rights and the rights of others like me. But he just wants me to get a J.D. or Ph.D. from Harvard first; then I can go save the world.