As I believe I've previously mentioned I was in the closet throughout my collegiate career because I felt I had to be in order to get the references I needed to move on with my life (i.e. seminary). Initially I was okay not talking about it, but as time passed I became increasingly frustrated that I had to talk out of the side of my mouth for the sake of self-preservation within a community that claimed to want to discuss the “big issues” of our day - although only if you played for team hetero. 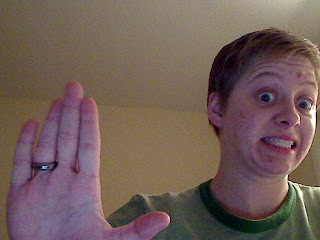 Don’t get me wrong - I love and respect many people from that time, but unfortunately the bitterness of loneliness colors the way I remember my last four years.

I've gone through plenty of unfortunate events in my life, however coming out and wrestling with that by myself stands as an exceptionally painful moment.

Several weeks ago I was talking about Things and Feelings at lunch in the Duke Divinity lounge. The woman I was conversing with had just been “evangelized to” outside of the Brian Center, and apparently in this exchange the person trying to recruit her to Team Jesus asked what she thought about Teh Gays.

I took this opportunity to mention my own gay-ness and how exhausting it had been to be semi-honest and fearful, an experience which motivated me to choose Duke. I praised Duke Div's ability to be orthodox and inclusive (although I don't really know how the two can ever be divorced), and I expressed my gratefulness for a community of people who I felt safe to be myself around.

Although I'm sure it appears otherwise from my posts on BDU, I actually don't (explicitly, at least) inject my sexuality into everything I do. I can and do talk about other things quite regularly. I have a variety of interests, and ladies are just one of them.

(However I suppose my faux hawk makes everything I do implicitly gay...)

I don’t need to talk about My People and Their Rights all the time. I know gay people who do that and it’s like. Get a hobby please.

That being said, though, I want to feel safe being honest in the event that gay-related things do come up. Sexuality came up on the regular in college and I couldn’t actually contribute my view(s) because it would have been incriminating and destructive to the world I had so carefully constructed. Feeling obligated to be less-than-honest for the sake of everyone else's comfort (and to ensure my academic reputation) was painful, to say the least.

In this Christmas season, when Jesus came into the world in all kinds of compromising and socially unacceptable/unexpected ways, I am infinitely thankful to be a part of a people who, even if they don't agree with me, don't dismiss me automatically for loving who I love and being who I am. I am thankful I don't need to cloak the "real me" for the sake of academic preservation, and furthermore for the opportunity to talk about my Things and Feelings on the BDU blog.
Posted by Kate at 8:00 AM