In which I kick someone 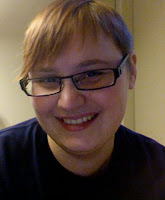 I hope everyone had a lovely break! Mine was a bit of an emotional rollercoaster. On the 4th, I posted this facebook status:


Holyshit. My mom just walked into the Skyward Sword Room where I'm hanging out with my two brothers and their friend, and she said "I have a question for my three children, my three sons..."
I seriously never thought I would hear her call me her son. We are super-weirdly Not Talking About It and they are NOT calling me Lawrence but holyshit. Holyshit. I think they might come to my graduation after all.
(The question was about pizza.)

On the 5th, I wrote but did not publish this facebook status:


My dad called me a freak, so I kicked him. My foot hurts.

I still kind of think the second one is funny, in a black humour kind of way. I mean, if you know me, I'm not really a solve-things-with-violence kind of person; it's incongruous. (Maybe I can blame the T?) But I decided not to post it-- and afterward, I was really struck by my own determination of what kind of information is inappropriate for public broadcast.

I mean, both of these are personal events. Really personal. But when the first one happened, I practically wanted to work through my entire cell phone's contact list and tell everyone I knew. I ended up not making any calls only because it would have taken too long, and facebook was faster. Compare that to the second one... I actually had a really long conversation with both parents, but even the imaginary facebook status only hinted at what was going on. And in the end I only told one person, when I called a friend to have a cry.

Obviously, I'm changing my mind now -- but mostly because the very first thing I encountered when I got back to Duke was a friend saying they heard the great news about my parents, and I feel like unless I publish some kind of public retraction I'll be dealing with painful congratulations for weeks.

Which is where this stops being completely self-indulgent, and connects to something I feel like I've seen a lot of places. In general I feel like there's pressure not to talk about the really sucky parts of coming out as LGBTQ, especially when it comes to parents. Or rather, there's an insistence that it always gets better, for everyone, and I think that insistence makes life even harder than it needs to be for the people who don't see things getting better.

Because here's the thing -- I'm lucky. I actually do think my parents will come around. I expect things to be perfectly fine with my parents by 2022. I think they will start being radically more accepting within a couple years of me passing full-time. I know that it will get better eventually. But not everyone is that lucky, especially not people on the trans spectrum.

I think especially in the community, it's hard to listen to statements like "my parents will never accept me" or "I will never see my brothers again" without wanting to contradict them, because we don't want these things to the possible -- not for our friends, and not for ourselves. How can a mother really stop being there for her child? Nobody wants to believe it can happen -- but it still does.

In yesterday's Anonymous Posts, #6 talks about how there are some families that are impossible to come out to, and will never come around -- and the first comment response is someone offering hope by saying that the "right time" will eventually come. I think this person was saying something that was true for them, and I think they were trying very hard to ease another's suffering -- but I also think the next commenter, who argues that "some fears of coming out are fully rational", is more realistic.

More importantly, things can be bad without being doomed. Relationships are complicated, and they don't get 'fixed' in a single instant. And just because they'll probably be better someday, that doesn't eliminate the pain of now. Sometimes, all that matters is that I kicked my dad, and we need to be able to say these things.

But it's painful for everyone when we're reminded how far the world still has to go, and nobody wants to be the "downer" who spoils the mood; it's easier to keep these things private, even if that means feeling alone even when others are going through the same thing.

So, I want to give thanks to the amazing friend who let me cry. And I want to open up this thread for anyone to express any fears or regrets or grief that they want to get off their chests. Be anonymous if it will help. I will give every single one of you a hug.
Posted by Lawrence at 7:58 AM